King Mudbeard, ruler of the Bad Piggies, plots revenge against the Angry Birds after they devastated his homeland in a prior battle to reclaim their eggs, leading to a comical war that seemingly does not end until a mysterious purple bird named Zeta threatens them all with her own plans for conquest after being fed up with living in a remote, arctic island. To avoid a frozen fate, the Birds and Pigs may have to make the impossible choice to forge an uneasy alliance against Zeta and embark on a new adventure.

Through Twitter it was announced that Nicki would be voicing the part of Pinky in the movie. Pinky is a long, pink bird with feathers on the top of her head. 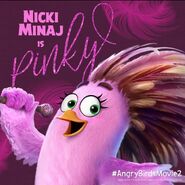