Ariana Grande-Butera (born June 26, 1993), known professionally as Ariana Grande, is an American actress and singer-songwriter. She grew up in Boca Raton, Florida where she attended North Broward Preparatory School. Grande made her acting debut in 2008, playing the role of Charlotte in 13 on Broadway. From 2010 to 2013, she played Cat Valentine on the Nickelodeon sitcom Victorious and later reprised the role on the spinoff Sam and Cat, which got cancelled due to an alleged feud with star Janette McCurdy. She then moved to music and has released five studio albums: Yours Truly (2013), My Everything (2014), Dangerous Woman (2016), Sweetener (2018) and Thank U, Next (2019).

Grande and Nicki Minaj have collaborated on a total of 5 songs: Jessie J's song "Bang Bang" which features Grande and Minaj, Minaj's "Get On Your Knees" featuring Grande, Grande's "Side To Side" featuring Minaj, Grande's "The Light Is Coming" featuring Minaj, and Minaj's "Bed" featuring Grande. The two have performed together twice at the Video Music Awards (2014 performing "Bang Bang" with Jessie J and 2016 performing "Side To Side"), and twice at the American Music Awards in the same years performing the same songs.

In March 2013, Grande reached mainstream success after "The Way" from her debut studio album, Yours Truly (2013), became a top ten hit on the Billboard Hot 100 and was certified double platinum by the RIAA. The album received critical acclaim and debuted at number one on the Billboard 200. This made Grande the first female artist to have her debut record enter the chart in the pole position since Animal by Kesha in January 2010, and the fifteenth female artist overall. Later, Grande was honored by The Music Business Association in 2014 as Breakthrough Artist of the Year, to recognize Grande's achievements over 2013.

Ariana Grande originally wanted Nicki for the song "Problem", but Nicki turned her down because Nicki was already working on too many featured guest appearances at the time and she also didn't consider Ariana a valid collaborator for herself.[citation needed] Iggy Azalea then took the featured verse. Ariana Grande (after "Problem" became a hit) asked Nicki to feature on the remix of the song alongside Iggy but once again Nicki turned down the opportunity because she made a promise she would never work with another female rapper.[citation needed] Ariana then later sent her demo of "Bang Bang" to Jessie J to finishing recording the song. Jessie J and Ariana Grande then decided to get Nicki on the track. Minaj agreed for the simple reason that she loved the song and that because of both Jessie J and Ariana's success, which made them both valid collaborators. After the success of "Bang Bang," Nicki asked Ariana to feature on The Pinkprint, to which the song "Get On Your Knees" was created.

In 2016, Grande asked Minaj to be featured on her third album Dangerous Woman, which eventually led to the hit that is "Side to Side". 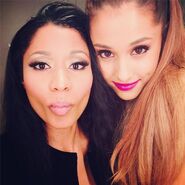 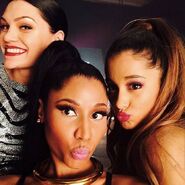 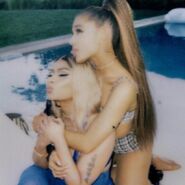 2011 Grammys (The day they met)
Add a photo to this gallery
Retrieved from "https://nickiminaj.fandom.com/wiki/Ariana_Grande?oldid=83217"
Community content is available under CC-BY-SA unless otherwise noted.