Beats 1 is a freeform music radio station operating 24/7, operated and owned by Apple. It has offices located in London, Los Angeles and New York City, and first aired on June 30, 2015.[1]

Queen Radio is a radio show Minaj has done through Beats 1 in promotion for Queen. It debuted on August 10, 2018 at 7PM Pacific Daylight Time.

Nicki Minaj appeared on the show and was interviewed by Zane Lowe. She discussed numerous topics during her interview, including her feelings on Cardi B and Quavo in relation to "MotorSport", issues between Drake and Meek Mill, forgiving Azealia Banks following her rude comments towards Nicki, her new documentary in the works, her upcoming world tour, and some background on the writing and recording of "Chun-Li". 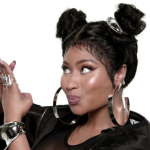