Beauty and a Beat

"Beauty and a Beat" is a song by Justin Bieber from his third studio album Believe, which features guest vocals from Nicki Minaj. The song is the third single from the album. It was written by Max Martin, Anton Zaslavski, Savan Kotecha and Minaj, and produced by both Martin and Zaslavski. It was released in the UK on November 12, 2012, and officially impacted US Mainstream Radio on November 13, 2012. A music video was filmed on September 7 and 8, and premiered on October 12, 2012.

It debuted at #72 on the Billboard Hot 100 chart prior to its release. It re-entered at #71 after it's official release. It has been certified 3x Platinum in Australia and Canada, 2x Platinum in the US, Platinum in New Zealand and Norway, and Gold in Italy.

Bieber spoke upon the collaboration with Minaj, saying: "I wanted a female rapper and I think that she is the best choice. I felt she just fit on the song perfectly."[1] Kyle Anderson of Entertainment Weekly called the song "urban swagger".[2] With Beauty and a Beat entering the Top Ten on Billboard Hot 100, Nicki Minaj tied with Missy Elliott for having the most Top Ten entires, which is nine.

The song is also included on "Believe Acoustic", but with an acoustic version, and not featuring Minaj's verse.

Minaj started teasing her fans, on October 11, by tweeting: "the barbz have a BIG surprise coming tomorrow."[8] Bieber retweet it in a few moments later. On October 12, Minaj tweet: "I'd be by a computer in 20 mins if i were u," and was retweeted by Bieber later.[9] Finally, Bieber tweet a link to the video at 10:07 am.[10]

The video had set the record for the most views in 24 hours on VEVO, with 10.6 millions views.[12] Since then it has been broken twice. Once by Miley Cyrus and then by One Direction (We Can't Stop with 10.7M and Best Song Ever with 12.3M). Both artists, Minaj and Bieber, have set records with their previous music videos ("Stupid Hoe" and "Boyfriend", respectively). 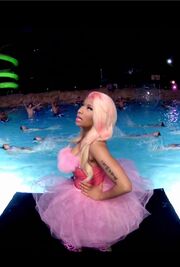 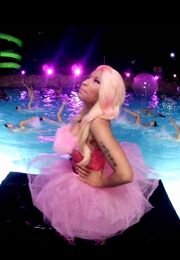 "Beauty and a Beat" was performed at the Believe Tour by Justin Bieber. At the 2012 American Music Awards, Justin performed the song with Nicki Minaj.