Carol Maraj is a singer, as well as Nicki Minaj's mother. She is of mixed Afro- and Indo-Trinidadian ancestry. She is from Saint James, Trinidad and Tobago. When Minaj was a little girl living with her grandmother in Saint James, Carol and her husband, Robert Maraj, were living in America, looking for work and a house in Queens, New York City. She would occasionally visit Nicki. After finding a home, Minaj moved to Queens with them at the age of five.

Carol Maraj was born on December 24, 1959. Carol is the tenth child of eleven. She grew up on Fort George St James. They were the first family to have a concrete house with running water and a TV. She went to school at St Agnes Anglican Primary School and then to Tranquillity Government Secondary School. When Carol was in high school, one day her 18-year-old brother was breaking up all the louvers in the windows. He was destroying everything. Repeated episodes and the worsening symptoms of her brother's acute mental illness made the home very chaotic and growing up more difficult than usual.

When she got married, at 20, she moved from one violent home to another, Bournes Road. Her son came first and her daughter(Onika Tanya Maraj or mostly known as Nicki Minaj) came after but they both came into a house of extreme pain. She worked at the Ministry of Works, Long Circular, in St James and in Big Yard, Diego Martin, as a chequer handling payroll. She also worked at the National Insurance Board (NIB) as an accounting clerk and at the National Commercial Bank (NCB) as a foreign exchange teller. She was 24 when she arrived in New York, the Bronx, and entered Munroe College. Her husband followed six months after. She petitioned for him. She wanted to keep her family together and needed his support to help her raise their children in a new country. They were still a young family. Things were supposed to change for the better; or so, he promised. He got a job at American Express. She left her two children in St James, with her mother. The children came a few years after. When the time drew near for the arrival of the children her father helped her buy her first house in Queens on 147th Street, off Rockaway Boulevard. One winter night, in December 1987, he went into a rage, and her husband tried to kill her when he burned the house down.

During Minaj's childhood, her father began abusing drugs and alcohol. Carol, then a nursing assistant, "did her best to keep Nicki and her younger brother safe." Carol moved several times with her children, but her husband always managed to find them.[1]

They were living in Jamaica, Queens, and Nicki told them that Lil Wayne was interested in her music and paying her a lot of attention. Maraj told her daughter that "we just have to pray on it. That God wouldn't bring her this far and not see it through. I told her God was going to complete it. I prayed and then I told her it is done! When she called me with the news she was so excited. We were all blown away by her success."

Carol is also a singer, songwriter, and a playwright who writes drama presentations for the church. She will release her first gospel single. She attends Life in its Poetic Form Ministries on Washington Avenue, in Brooklyn. "I had to heal and build back my strength so I started writing again. I started spending more time writing about my life." She's been working on an inspirational book. "A book that looks at what brought me here, to this new place." She didn't do it all on her own. She credits the older women of her church for propping her up on those days when she was really down. "Those older women came to my house and prayed for us. God sent some strong and inspirational women to help me stand up."

She is been doing a lot of motivational speaking, using her voice, sharing her experiences with women in New York City through the Centre of Domestic Violence in Manhattan, but she wants to give back to the country of her birth. It is her calling to serve women in Trinidad & Tobago who are victims of abuse.

Their family have come a long way.

Pictures of Carol and Nicki 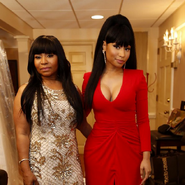 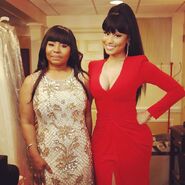 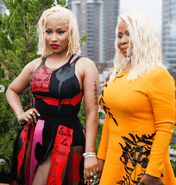 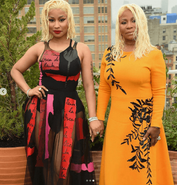