Nicki Minaj Wiki
Register
Don't have an account?
Sign In
Advertisement
in: Songs, Minaj songs featuring others, Singles,
and 3 more

"Check It Out" is a joint release by American rapper will.i.am and Nicki Minaj. The song, written by will.i.am and Minaj, samples the 1979 hit single, "Video Killed the Radio Star" by The Buggles. After release, it debuted on the US Billboard Hot 100 at number 78 and number 48 on the Canadian Hot 100. The song was released on Minaj's debut album, Pink Friday, though it was not released in promotion of the album. The UK version also features additional vocals from will.i.am's close friend, British singer Cheryl Cole. The UK version is expected for inclusion on will.i.am's fourth studio album, #willpower.

The song samples "Video Killed the Radio Star" by The Buggles. Minaj stated in a past interview with Entertainment Weekly that she was working with producer will.i.am on her latest album, not hinting at whether it was a production or a featured help, stating; "Just something for my album that I’m really excited about.” An unofficial mix of the song ended up leaking onto the internet August 27, 2010, two weeks before its official release.

In an interview with MTV News Minaj commented on her collaboration with the producer will.i.am stating; "I worked with tons of producers on my album, shout out to all of them. Will’s the only producer that produced me. He really sat there and got this weird sound, and I was like, ‘What?’ It was so simple. He was sitting there and he made the beat on the spot." She continued on saying that "I was sitting there, and it was like five minutes later, he finished the beat!" The Buggles, the British band behind the original, performed the updated record "Check It Out" at shows at London’s Supperclub and The British Music Experience at the O2. Lead singer Trevor Horn commented on his song being sampled by the duo by stating “We’re very happy because it means we made a little bit of money for it.”

"Check It Out" features the nearly constant repetition of the piano and vocal hook from The Buggles' 1979 classic 'Video Killed the Radio Star,' which is famous for being the first video ever played on MTV. The song received mixed reviews from critics. Matthew Wilkening of AOL Radio Blog states that the "Incessant 'Oh-a oh's' pretty much bore a hole in your head, the duo verbally flip the bird to their haters while on their way into the hottest dance club in town." Wilkening gave the songs lyrics a negative review stating "If you're looking for deep lyrical insights, jeez, are you at the wrong party. Becky Bain of Idolator gave the song a positive review stating, "We almost want to cry foul for taking an extremely beloved 80s song (okay, the song was released in 1979 but the video debuted in 1981) and appropriating it for a modern-day hip-hop song, just because that’s become so commonplace it’s an uncreative, predictable way to get attention for your song. But… but… but… we can’t hate. We love this. We have no taste. It’s just too much fun—we can easily see this getting massive radio play like her other let’s-sample-another-popular-song-from-another-decade hit and make people's ears bleed, “Your Love”. What say you?" Entertainment Weekly put the single as their #2 of "The Must List" stating, "The Black Eyed Peas front-man and hip-hop's reigning femme fatale make ingenious use of those famous coos from the 1979 Buggles hit "Video Killed the Radio Star" to create an irresistible party-starter."

The UK version features Cheryl Cole, but both versions of the song were released in the UK for digital download on October 31, 2010 and CD on November 1, 2010. It is listed as the "Special Mix" on iTunes. A new version of the music video was released on 11 November 2010. This music video was for the UK 'Special Mix' which features Cole. The video is mostly the same as the original with added new video clips that includes Cole. 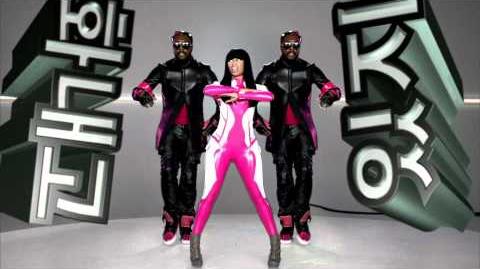 A music video for the single was shot over the weekend of September 26 in a studio in Los Angeles director Rich Lee. In an interview with MTV News Will.i.am stated "You can expect to see a bunch of flyness as far as the outfits. When I say flyness, I’m talking about Nicki’s outfits. She’s looking super-duper fly and whatnot." The video is a tribute to Japanese anime. Nicki also commented on the video shoot and its theme, stating "We’re doing almost like an ode to Japanese culture and Japanese anime. I’m obviously a big fan and I’ve joined forces with like the only boy that I know that’s also able to capture that culture." A behind the scenes video was released along with the interview. This is however in contrast to both the spoken introduction of the video and the words popping up during the video; the words are written in hangul, the Korean alphabet, and the intro is spoken in Korean language.

The music video for the single was released October 25, 2010. The video starts on a simple soundstage. A gentleman introduces the pair to an audience of women similarly dressed in black and sporting boxy sunglasses. As the song begins playing from a boom box, Minaj — wearing a creatively shaped teal, cream and mauve hat, blond wig and tan outfit — raps to the camera that she's a "savage/ Haters you can kill yourself." When the chorus arrives, so do two will.i.ams dressed in white jackets. Cape is wearing striped shirts and black pants. Then two dancers, clad in futuristic clothing and goggles, begin grooving and suddenly multiply into five more clones all executing the same moves. The scene flips back to the camera featuring Nicki, and there's now only one will.i.am and two Nicksters. When the beat slows down for the song's bridge, Minaj is in a new outfit, a pink and white bodysuit with a black wig. Then will.i.am, who received flack for performing during the VMAs in what many described as black face, appears in what one could call "white face." He becomes a black and white cartoon, whose face is white but hair is black, as he rhymes "step up to my level need to grow a little taller." The video ends with Minaj and Will striking poses.

Minaj and will.i.am appeared together at the 2010 VMA's Pre-show, where the duo performed "Check It Out" as well as Minaj appearing alone to perform her single "Your Love". Rap-Up magazine said the performance had eccentric dancing and pink escapades. However a Chris Ryan from MTV Buzzworthy was less impressed with the duo appearing as The Jetsons. He said "The WTF? ... Look, we LOVE Nicki Minaj. We would fake-marry her if Drake hadn't already fake-married her. And one thing we really, really love about Nicki Minaj is the wild and crazy looks she breaks out. But given the flack he's taken in the last few days over his, um, unique choice in attire, she might have wanted to pregame with Will.i.am a little harder, regarding his stage fashion." He later went on to say that Minaj's performance lived up to expectations. "And of course, Nicki more than delivered. Harajuku Barbie really brought the house down with "Check It Out", You have to see it to believe it."

However will.i.am attracted negative media criticism for his choice of outfit, consisting of: "an all black leather outfit with matching all black make-up". Sean Michaels of The Guardian said "It was a look more Max Headroom than Al Jolson, but never underestimate the Internet's capacity for righteous indignation", "1st. just because I where [sic] all black including head mask as expression and emphasize my outfit, it shouldn’t be looked at as racial…, let go of the past. there are far more important things 2 bark about. (Jobs, health, education) not a black man wearing all black everything. Are you guys serious? my outfit set “black people back 100 yrs” choose your twits wisely. no education sets people back, no jobs, bad health." Minaj agreed with Will.i.am's decision and attire in an interview with Hot 97’s Funkmaster Flex stating "You can’t expect him to make common folk happy."

The duo also appeared on the Late Show with David Letterman on October 4, 2010. The performance recalled some of the elements of their VMA performance, including the two female back-up dancers and Minaj's hype man S.B. wearing a Pink Friday t-shirt. Both later performed the single on the Live with Regis & Kelly show on October 11, 2010. Minaj performed in a blonde wig, kaleidoscopic Marc Bouwer couture dress, and Christian Louboutin ankle boots.