Sean John Combs (born November 4, 1969[1]), also known by his stage names Diddy and P. Diddy, is an American rapper, singer, record producer, actor, and entrepreneur. He has won three Grammy Awards and two MTV Video Music Awards, and his clothing line earned a Council of Fashion Designers of America award. He was originally known as Puff Daddy and then as P. Diddy (Puff and Puffy being often used as a nickname, but never as recording names). In August 2005, he changed his stage name to simply "Diddy", but continues to use the name P. Diddy in the UK as the result of a lawsuit. He formed and recorded with the group "Diddy – Dirty Money".

Combs was born in Harlem and grew up in Mount Vernon, New York. He worked as a talent director at Uptown Records and then founded Bad Boy Records in 1993. His business interests under the umbrella of Bad Boy Entertainment Worldwide include Bad Boy Records; the clothing lines Sean John & Sean by Sean Combs; a movie production company; and two restaurants. He has taken the roles of recording executive, performer, producer of MTV's Making the Band, writer, arranger, clothing designer, and Broadway actor. In 2011, Forbes estimated his net worth at $500 million, making him the richest figure in hip hop. Diddy and Nicki both collaborated on two songs togehter, the first was with DJ Khaled on the official All I Do Is Win (Remix). And a remix of a song with his group Diddy-Dirty Money Featuring Rick Ross & Nicki on the Hello Good Morning Remix, there are several official remixes, the first was done solo by the group, the second included TI, the third included Rick Ross & T.I.,Then Rick Ross was kept and T.I, Was replaced by Nicki Minaj, The first of the two U.K. mixes featured Tinie Tempah and Tinchy Stryder. While a new beat called Hello Good Morning (Grime Mix) Featured Skepta, with new verses by Diddy and The Dirty Money Girls rapped in this version.

Diddy has twice collaborated with Nicki Minaj and was her manager for a brief stint in early 2010. 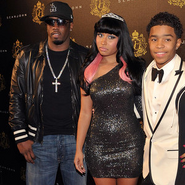 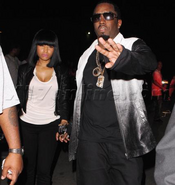 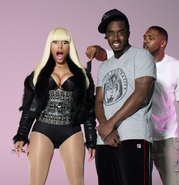 All I Do Is Win video.
Community content is available under CC-BY-SA unless otherwise noted.
Advertisement