"Freedom" is a song by Nicki Minaj from the re-release of Minaj's second studio album Pink Friday: Roman Reloaded - The Re-Up. It serves as the second single from the re-release. It was written by Minaj, Matthew Samuels, and Matthew Burnett, and it was produced by Boi-1da, and co-produced by Burnett. The song was first played on Tim Westwood BBC Radio 1Xtra in the UK on November 3, 2012, and was released as a digital download the same day but just in US and Canada. It was later released in the UK on November 8. A music video was shot on November 1 and premiered on November 19.

On October 1, 2012, Nicki said on Twitter that she finished writing the Barbz's favorite song off The Re-Up.[1] The next day, a fan asked "what's the initials," and she simply replied, "F",[2] which is the song "Freedom."

In 2012, a promotional CD single of the song was distributed under Universal Republic label.[7] The CD was not sold in stores, but it was distributed officially to DJs, radio, select media and special giveaway promotions. The cover artwork is almost the same as The Re-Up cover artwork. It differs from the album cover because, instead of the full name of the album, it has written the name of the song ("Freedom") and has written down "From the release Pink Friday: Roman Reloaded The Re-Up" in capital letters.

"Freedom" was written by Minaj, Matthew Samuels, and Matthew Burnett,[8] and was produced by Boi-1da.[9] The song is a hip hop track with a light R&B ditty.[10] The song is also heavily influenced by pop and ambient music. The song is over a drum-patterned beat.[11] Minaj reflects on her success and contemplates fame on the song, asserts her dominance, credits herself for opening doors for other females, and thanks her crew including Lil Wayne.[11] The song was compared to previous works of her like "Right Thru Me," "Your Love" and "Save Me" off Pink Friday.[12]

"Freedom" was received with general positive reviews from music critics which most of them praised Minaj for returning to her roots. Sam Gould from SoulCulture said that "might not mark an end to the bubblegum nonsense pop" but he praised the song for being "the best thing I've heard from her in a long while." [13] Trent from The Lava Lizard made a very positive review about the track commenting that the song "is a perfect reminder of Minaj's talent as a rapper and a welcome departure from her Pop-oriented attempts at crossing over."[14] Zach Frydenlund from Complex praised the song saying that "Minaj has blessed the world with her new single "Freedom" tonight."[15] He also congratulate the "nice flow" and the "great vocals."[15]

However, Kyle Anderson from Entertainment Weekly commented negatively about the track saying that "calling her career [Minaj's career] 'the pinkprint' is pretty clever, but the rest of it sounds like it could have been made by just about anybody."[16] He then scolded Minaj because "the most frustrating thing about [her] is that she seems to actively subvert the fundamental skills that let her stand out from any other rapper or pop star out there."[16] Randall Roberts from LA Times gave the song a very negative review calling the song "a shockingly mediocre humblebrag track."[17] He also criticized Minaj for not writing about the storm "Sandy" (that hit Minaj's home Queens), which devastated New York a week prior of the release of the track.[17]

The song was performed on her Pink Friday: Reloaded Tour. Minaj performed the song for the first time in the US at the 2012 American Music Awards on November 18, 2012. She also performed the song on January 15, 2013, at The Ellen DeGeneres Show, and at Jimmy Kimmel Live! along with "Va Va Voom", "High School", "I'm Legit", and "Roman in Moscow" on January 25, 2013. 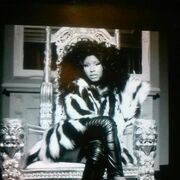 They'll never thank me for opening doors
But they ain't even thank Jesus when he died on the cross
'Cause your spirit is ungrateful
Bitches is so hateful, I remain a staple
My career's been the pinkprint
When I retire, tell 'em think pink
Pink Friday is the imprint
And these bitches basic, instinct
Oh shit, my commercial's on
Did I really body bitches with commercial songs?
Did I really prophecy every thing I do?
But before I continue, let me thank my crew
So that was Young Wayne, Mack Maine, Baby and Slim came
Tezz and EI told me it wouldn't be in vain
'Cause prior to me signing, I could've went insane
And even now I think, "Do I really want this fame?"
Let me get up and go, 700 to go overseas for a show
Everybody get quiet when I'm starting the show
Man, I'm birthing these artists and I'm starting to show

Who I wanna work with? Nobody! 99% of them is nobody
Bitches acting like they killing shit, OK
When I check these bitches guns, no bodies
These niggas is fake fucks and opportunists
Niggas spend they last dime to say the copped the soonest
Why these niggas going broke to get your approval?
Pretty soon, they'll be back up on them Ramen Noodles
B-B-B-bible, Queen is the title
And if you are my rival, then that means you're suicidal
And if you in the club, then it's a Young Money recital
I'm just that vital, I'm busy, never idle
I'm ya idol, I'm ya idol, I'm ya mothafuckin' idol
Pink Friday in Macy's, thongs and some pasties
(Yo, what other female rapper perfume in here? 'Cause I must've missed it)
12 milli to kick my feet up, get ready this is the Re-up

The credits for "Freedom" are adapted from the liner notes of Pink Friday: Roman Reloaded - The Re-Up.[24]