"Girl On Fire (Inferno Version)" is a song by Alicia Keys featuring Nicki Minaj from her fifth studio album, Girl on Fire. The song was written by Keys, Minaj, Billy Squier, Jeff Bhasker and Salaam Remi, and was produced by Squier, Bhasker, and Remi. It is one of the three multi-formats versions of the song. The other two is the Standard Version and the Bluelight Version which does not feature Nicki. The song was released as the lead single of her album on September 4. It officially impacted Urban and Rhythmic Radio on September 11, 2012, and officially impacted Mainstream Radio on October 16, 2012. It is also the only version of the song to be featured on the standard version of Alicia Keys's album Girl on Fire.

The song has been certified 3x Platinum in Australia and the US, 2x Platinum in Canada, Platinum in Denmark, Germany, Italy, New Zealand and Switzerland, and Gold in Austria, Belgium, Mexico, and the Netherlands.

On August 30, 2012, Keys announced that the lead single of her upcoming album is called "Girl On Fire": "Crazy excited!!! My new single #GirlOnFire will be unleashed soon!!! Are you ready?" [1] She also reveal the cover of the single and the release date (September 4).

On September 2, it was revealed that the song would have three versions available for downloading: the standard version, the "Blue Light" version, and the "Inferno" remix featuring rapper Nicki Minaj.[2] The cover artwork for the two other versions was also revealed. The song leaked one day before it's release, on September 3.[3] The song was released (along with the other two versions) on September 4.

Well Nicki's a girl on fire. Nicki and I are maybe what seems like from two different worlds but in actuality, girls on fire are from everywhere. It doesn't matter who you are, how you are, in what way you express it - that's what's important about it. I think the rhyme that she did on the Inferno version of 'Girl On Fire' is really special. I think it's really a very raw, honest Nicki that I really love.
—Alicia Keys, VMA 2012, Red carpet

The song is a drum-heavy record, written and produced by Billy Squier, Jeff Bhasker, and Salaam Remi.[4] The track opens with a thumping midtempo beat as Minaj spits a verse about not succumbing to the dangers of Marilyn Monroe-inspired excess and self-destruction.[5] Keys soars in the chorus, which is simultaneously simple and glorious: “Got our feet on the ground / And we’re burning it down / She got her head in the clouds / And she’s not backing down / This girl is on fire / This girl is on fire / She’s walking on fire / This girl is on fire.”[5] In her second verse, Minaj prays for strength and resilience to deal with critics and adversity, closing with “X in the box / Ain’t nobody checkin’ me.”[5]

The song received very positive reviews from music critics. Jessica Sager from PopCrush said that the song "doesn’t disappoint" and praise both Keys and Minaj saying that "both artists share the spotlight on this song."[5] TJ from Neon Limelight called the song "powerful".[6] Website Rap-Up.com said that Minaj "adds some fuel to the fire" and that "[Keys] anthem kicks off with a blazing verse from the Young Money diva."[4]

The song was performed at the 2012 MTV Video Music Awards. Alicia Keys performed a special mix of the song along with Nicki Minaj and gymnast Gabby Douglas.

A music video was released for the normal version on October 19, 2012. The music video for the Inferno version was directed by Sophie Muller and premiered on November 2, 2012, on VEVO at 5:45 pm. 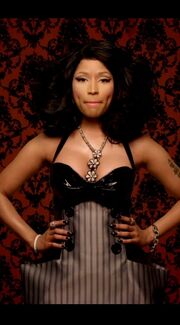 In the chart week ending September 7, 2012, "Girl on Fire" debuted on the US Hot R&B/Hip-Hop Songs chart at number sixty-seven. This in part was driven by 2.1 million radio impressions according to Nielsen BDS.