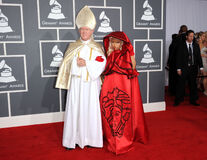 Minaj began her controversial Grammys debut performance with a short snippet of her alter ego, Roman Zolanski, rapping the beginning of "Roman's Revenge", After that he continues next to a priest singing scratched lyrics of "Roman's Revenge" (I feel pretty). Then, roars a quick burst, the room goes dark, and the screens show "The Exorcism of Roman." A door opens and an old woman says to the priest that "he's not okay" and is upstairs. Once the priest goes upstairs Roman stands at a mirror putting on lipstick saying he is pretty. The priest asks him his name and he screams "ROMAN!". From there, the performance returns to the stage; showcasing Roman in chains as "Roman Holiday" begins, he begs for Martha to stop, saying "stop it mother please!". Roman eventually breaks free of the chains, and finishes the performance by ascending into the air by suspended wires.

The religious aspect of Minaj's performance was seen as disrespectful towards by the Catholic Church. As Nicki said in an interview with Extra: "I've been doing theatre my whole life.....you are doing a musical, right? So if you saw a scene with a church is that blasphemous? What I do is art and they have something that seems a little offensive, it's still art, and if you don't like it then you don't have to look."

Behind the scenes drama revealed

Nicki has never won a Grammy, and has attributed that to her dispute with the Recording Academy over her 2012 "Roman Holiday" performance. In the weeks leading up to the 61st Grammy Awards longtime friend and collaborator Ariana Grande and Grammy award show producer Ken Ehrlich publicly discussed their disagreements about Ariana's Grammy performance that would ultimately never happen. It was said that Ariana didn't want to perform the song Ehrlich told her to and so she refused to perform after many back and forth discussions. Ariana wanted to have creative freedom over her performance and wouldn't compromise her artistic integrity. During this time Nicki made several tweets about her past with the Recording Academy and how Ehrlich had bullied her too and that she felt that she was being blackballed from winning an award. She said "I pissed off the same man Ariana just called out for lying, Grammy producer KEN. I was bullied into staying quiet for 7 years out of fear. But I’ll tell my fans the REAL on the next episode of #QueenRadio they deserve the truth" She didn't elaborate on these statement until months later after the release of "MEGATRON." On the thirteenth episode of Queen Radio in June of 2019 Nicki revealed why she made those previous statements. She explained that the Grammy Award Show producers had approved of her performance of "Roman Holiday" and she was being featured heavily during the Recording Academy's ad campaign for the upcoming show. Three days before the show, legendary vocalist Whitney Houston had passed away and for an unknown reason, Ehrlich used this passing for a reason to ask Nicki to cancel her performance. Nicki refused to give up her performance because she didn't want to let the Barbz down and because of all the ads she was featured in. because of this disagreement and the backlash to her religious-inspired theatrical performance from the Catholic Church, Nicki believes that she has been blackballed from winning an award and that she has seen similar stories happen to other artists.