Radric Davis (born February 2, 1980), better known by his stage name Gucci Mane, is an American rapper. He debuted in 2005 with Trap House and followed with albums such as Hard to Kill in 2006, Trap-A-Thon and Back to the Trap House in 2007. In 2009, his second studio album The State vs. Radric Davis was released, and The Appeal: Georgia's Most Wanted was released in 2010, and is his highest charting album so far. Gucci Mane has released many other mixtapes and independent albums as well.

While serving a six-month jail term for assault in late 2005, Davis was charged with murder, though the charges were later dropped due to a lack of evidence. In 2009, he served a year-long county jail sentence for violating probation for his 2005 aggravated assault conviction.

From late 2008 through early 2010, both Minaj and Gucci Mane had the same manager, Deb Antney, likely leading to their meeting and frequent musical features.

Though Minaj and Gucci have had a friendly relationship since their first meeting, Gucci unleashed a tirade on Twitter on September 9, 2013,[1] against various females including Minaj,[2] Tyga's girlfriend Blac Chyna,[3] Ciara, Kelly Rowland,[4] Iggy Azalea,[5] Keyshia Dior,[6] Fantasia,[7], T.I.'s wife Tiny,[8], Maliah Yoris, Jessica Kod,[9] Taraji P. Henson, and Monica Brown.[10] He claimed had sexual intercourse with all of them and drew Waka Flocka Flame, DJ Holiday and 50 Cent as witnesses.

Minaj and Tyga responded to his tweets, saying that he was angry because they turned down a request for a song from him, even showing pictures of a text message exchange between Gucci and Tyga. She later said that Gucci was "sick" and "in dire need of rehab."[18] 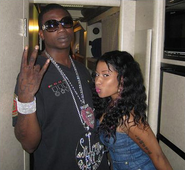