Nicki Minaj Wiki
Register
Don't have an account?
Sign In
Advertisement
in: Songs, Minaj songs featuring others, Singles,
and 4 more

"High School" is a song by Nicki Minaj from the re-release of her second studio album, Pink Friday: Roman Reloaded - The Re-Up, which features guest vocals from Lil Wayne. The song is the second single of The Re-Up, seventh and final single overall. It was written by Minaj, Lil Wayne, Matthew Samuels, and Tyler Williams, and it was produced by Boi-1da, and T-Minus. It leaked on November 16, 2012, and was released on November 19, 2012, with the whole album. It was officially released to Rhythmic radio on April 16, 2013, being the most added song to both Urban and Rhythmic radio during that week. A music video was shot on March 11, 2013, and premiered on April 2 on MTV at 10:53 a.m. ET, and on VEVO later that day. It has been certified Gold in the US.

"High School" leaked with the whole album on November 16, 2012, and was officially released on November 19, 2012. On November 29, Minaj opened a poll to determinate by the fans which song of the album should be the next single. "I'm Legit" won the poll with the most votes, while "High School" placed second, followed by "Up In Flames" third, "Hell Yeah" in fourth, and "I Endorse These Strippers" in fifth.[1] Though "I'm Legit" won the poll, "High School" replaced it as the next single.

Minaj confirmed the release of the song as a single in an interview with MTV on February 28, 2013: "I'm about to shoot another single off The Re-Up," she told MTV News, "the song is called 'High School' with Wayne."[2] The song was released as a single at Rhythmic radio on April 16, 2013.[3]

When the album dropped, fans noticed that "High School" reminded them of a mixtape song called "Hood Story". It was included on her first mixtape called Playtime is Over. Nicki recycled the verses "he said he came from Jamaica" and "he owned a couple of acres". At the end of "Hood Story", Nicki whispered, "To be continued", but it was never finished until now. She indirectly confirmed this speculation by retweeting "HOOD STORY PART 2".[4]

The cover artwork of "High School" was released as the profile picture of Minaj twitter on March 19, 2013.[5] The artwork is retrieved from a shoot of the music video of the song where Minaj is in a jacuzzi with her neon green bathing suit.

The song received favorable reviews. Jeffries from AllMusic said that the song "restores faith with three-and-half minutes of driven, witty filth." He also noticed that "The Re-Up comes on with such an anti-Roman, back-to-basics attitude that it slowly slithers up to the Wayne track.[6] Women in Hip Hop website gave a very positive review to the track saying that "aggressive voice and flow is a winning factor on this song, Lil Wayne did well and the catchy chorus helped round it out."[7]

Bené Viera from VH1 Tuner appreciate Minaj's "storytelling capabilities."[8] Jesal Padania from RapReviews commented negatively saying that "it's another song that doesn't really cut it," and it's "not compared to 'Roman Reloaded'."[9] 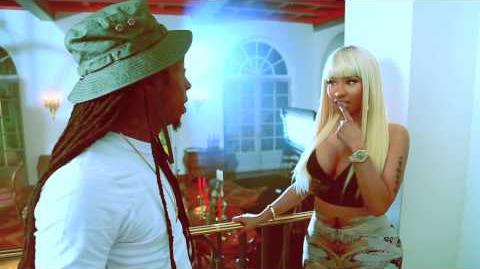 Minaj posted some pictures of the video shoot on March 12, 2013.[18] On March 19, Minaj posted a behind the scenes video filmed and produced by Grizz Lee.[16] She appears in a jacuzzi while showing her hot body in a neon green bikini, even inviting the crew to join in. She changes multiple times and is carried around set by a bodyguard. Wayne and Birdman also appear in the video. He suggests that she films in her birthday suit. Nicki originally wanted him to play her husband in the clip. "I would've loved that," he tells her.[16]

Nicki Minaj:
He said he came from Jamaica, he owned a couple acres
A couple fake visas 'cause he never got his papers
Gave up on love, fucking with them heart breakers
But he was gettin' money with the movers and the shakers
He was mixed with a couple things, ball like a couple rings
Bricks in the condo and grams to Sing Sing
Left arm, baby mother tatted
Five year bid up north when they ratted
Anyway, I felt him, helped him, put him on lock, seat belt him
Took him out to Belgium, welcome
Bitches this pretty, that's seldom
This box better than the box he was held in
I'm Momma Dee in that order, I call him Daddy like daughters
He like it when I get drunk, but I like it when he be sober
That's top of the toppa, I never fuck with beginners
I let him play with my pussy then lick it off of his fingers
I'm in the zone

Lil Wayne:
Alright, uh
She got a nigga at home, and one on the side
Best friend is a dyke, they fucked around a few times
Her and her momma alike, so all they do is fight
I tell her make me some money, she tell me "make me a wife"
I tell her, "Bitch, you crazy, fuck wrong with you?"
And excuse my French, but I'm a long kisser
And then she try to tell me I'm the only one that's hittin'
And I say, "What about them niggas?" She say, "What about them niggas?"
You right, what you doing tonight?
Put on something tight, don't judge me, I get life
She love me like a brother, but fuck me like a husband
Pussy like a oven, too hot to put my tongue in
All I had to do is rub it, the genie out the bottle
Pussy so wet, I'mma need goggles
She tell me that's it's mine, I tell her stop lying
Mine and who else? She say worry 'bout yourself
Lil Tune

I know you want it, boy
I see you tryin'
Just keep on pushin'
I'mma let you slide in
Just close your eyes and
This horizon
It's ready, come get you some
Yeah, yeah, yeah, yeah
[19]

The credits for "High School" are adapted from the liner notes of Pink Friday: Roman Reloaded - The Re-Up.[20]