Kimberly Denise Jones (born July 11, 1974), better known by her stage name Lil' Kim, is an American rapper and actress who was a member of the group Junior M.A.F.I.A..

Kim was born and grown up in Brooklyn, living much of her adolescent life on the streets after being expelled from home. As a teenager, Kim would rap for fun, being heavily influenced by other female MCs like MC Lyte and Lady of Rage. The Notorious B.I.G. took her in and began her music career in 1995 with the group Junior M.A.F.I.A., whose debut album Conspiracy generated three hit singles. In late 1996, her solo debut album Hard Core, written by The Notorious B.I.G, was released. Hard Core was certified double platinum and spawned three consecutive #1 rap hits that included: "No Time" "Not Tonight (Ladies Night remix)" and "Crush on You", a record for a female rapper. Her following albums, The Notorious K.I.M. (2000) and La Bella Mafia (2003), both were certified platinum by the RIAA, making Kim the only female rapper besides Nicki Minaj and Missy Elliott to have at least 3 platinum albums so far. Kim solidified her star power in 2001, when "Lady Marmalade", a song Kim was featured on, went to #1 on the Billboard Hot 100. That made her the first female rapper to earn a #1 on that chart. In 2005, she served a year long prison sentence for lying to a jury about her friends' involvement in a shooting four years earlier. During her incarceration, her fourth album The Naked Truth was released. Lil' Kim returned to the public spotlight in 2009 with an appearance on Dancing with the Stars. Within a short time span, Kim would become unrecognizable, after undergoing numerous plastic surgery procedures.

Lil' Kim is very well known for her rivalry with Nicki Minaj, despite the fact that Minaj once considered her an inspiration. This is because Minaj has many songs that are about Lil' Kim. The more notable songs are "Roman's Revenge," "Tragedy," "Y.U. Mad," "Stupid Hoe" and "I Am Your Leader."

Kim made a mixtape dedicated to Minaj called Black Friday, released on February 14, 2011. The mixtape also contains the track "Grindin’ Makin’ Money", a collaboration which features rapper Birdman and Nicki Minaj, which Kim claims ignited the feud between her and Minaj,[1] as well as another diss song towards Minaj titled "Pissin' On'em".[2] According to Kim, the mixtape "sold 113,000 copies" in just 28 hours.[3]

During a concert on the night of June 3, 2010, Lil' Kim and Ray-J made coarse remarks about Minaj, claiming the young MC bit her style. Minaj herself admits to being influenced by Kim, but does not consider herself to be stealing her style. During one of Minaj's concerts, Drake came on stage to respond to Lil' Kim's comments about Minaj. Minaj herself has not fired back at Lil' Kim. Lil' Kim and Baltimore MC Keys (who has been attacking Minaj, to which Minaj will not respond directly) have collaborated on stage to further diss Minaj.

As months go by, Nicki Minaj then made "Roman's Revenge" to subliminally diss Lil' Kim. Nicki raps: "Nicki she just mad 'cause she took the spot, word that bitch mad 'cause I took the spot? Well bitch if you ain't shittin' it get off the pot, got some n*ggas out in Brooklyn that'll off your top!" There were several speculations that Nicki dissed Lil' Kim. Many interviews later, Nicki then addressed the situation between the two MC's on Hot 97.

Lil' Kim was tired of the truth, therefore recorded Black Friday. Rapping: "Aight you Lil' Kim clone clown, all this buffoonery, the shit stops now!" In a span of a year or so, Nicki subliminally kept dissing Lil' Kim in songs she starred in such as; "Till the World Ends (The Femme Fatale Remix)" "Dance (A$$) (Remix)" "Y.U. Mad." Nicki rapped in "Y.U. Mad" "Yeah we shine, gold cluster, as for your career? Dead: Ghostbuster!" Lil' Kim responded with "Warning (Remix)" rapping "This bitch still throwin' shots?..." "This Lil' Kim clone, oooh I can't do it, seen this bitch on the awards, ooooh she look stupid!"

Lil' Kim also has an EP named I Am Not the One, which is aimed towards the MC. In late 2011, Nicki Minaj announced a new album named Pink Friday: Roman Reloaded. Nicki released two songs named "Roman in Moscow" and "Stupid Hoe" in which Nicki raps a subliminal diss to Lil' Kim. "Stupid Hoe" seemed like a song that takes more direct shots toward the MC. Nicki raps in "Stupid Hoe" "I get it crackin' like a bad back, bitch talking she the queen when she lookin' like a lab rat." She also raps "Ayo Baby Bop, fuck you and your EP!" Nicki is regarding the EP I Am Not the One that Lil' Kim released on iTunes. Lil' Kim later said that she is not a stupid hoe and that Nicki is the stupid hoe for insulting her in the song.[4] The beef apparently settled down but on May 28, 2013, after Minaj paid homage to Kim and other female rappers, Kim retweeted some of her fans tweets which said that Minaj was too late and that she is using Kim again for publicity. In Lil' Kim's song "Looks Like Money", she disses Cash Money, the label Minaj is currently signed to, in the verse "Cash Money, that was so last year", to which Minaj or any other Cash Money artist has yet to respond. Kim also released songs "Jay-Z", "Dead Gal Walking", and "I am Kimmy Blanco", which have verses that allegedly are directed at dissing Minaj.

In 2014 Kim released Identity Thief. Another track aimed towards Minaj.

In 2017, Kim took the side of Remy Ma, another rapper bitter at Minaj's success, and began to diss Minaj again. The two also recorded the track "Wake Me Up", in which subliminal shots are taken at Minaj. It's also worth noting that before Remy Ma's self-started recent feud with Minaj, Kim and Remy had been in a feud for years prior. 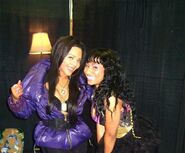