Nicki Lewinsky (pronounced LOO-IN-SKEE) (also known as the Mistress[1] or simply Lewinsky, retroactively called Old Nicki and Mixtapenika[2]) is one of Nicki Minaj's best known alter egos, active primarily when she was an underground artist. Nicki Lewinsky is characterized by her sexually explicit and very daring lyrics. She is often compared to Minaj's equally outrageous alter ego Roman Zolanski, but is notably less aggressive and more raunchy. Lewinsky, like Zolanski, is featured in many of Minaj's songs. When Minaj became more mainstream, she let go of the Lewinsky character because she felt the racy lyrics were not appropriate for younger fans.[3] In the song "Dear Old Nicki," she raps about how she has changed from the ghetto fabulous Nicki Lewinsky to the global superstar Nicki; the song also questions if her old self is on hiatus or truly dead.

The first appearance of Nicki Lewinsky was in the Sucka Free song "Sunshine"; Minaj called herself Lewinsky as a reference to Monica Lewinsky, who was the mistress of US President Bill Clinton. As Lil Wayne is nicknamed "The President Carter," Minaj called herself Lewinsky as a reference to Monica Lewinsky's affair with the president. The song "Sunshine" contains references to the Lewinsky scandal, such as Minaj saying, "Mr. President, you know the mistress gotta holla at you for a minute, right? Meet the girl in the oval office, it's nothing. Tell ya wife you gonna be a lil' late tonight," and Wayne rapping "He the president, yeah, she Lewinsky, but we never get caught."[4] Minaj also stated that when she is with "the president" she can be called "Nicki Lewinsky."[5]

When asked about the reference to Monica Lewinsky, Minaj stated:

"People are gonna hear that name and be like 'Oh my God, this bitch is a bird,' but check this out: this bitch [Monica] got in the same room with the President of the United States of America. People don't look at that on the large scale and just see that she was giving him head. I knew it was gonna get attention and people would have to something to say but you gotta understand...I'm with the president of Young Money, the hottest rapper in the world right now. Monica was able to get at the biggest person in the world and she had him to herself. She could've used that to her advantage but she didn't and that's a sad story. Nicki Lewinsky is a different story."[6]

Minaj means that her nickname is not just a joke; she, like Monica, is with a very important person, but, unlike Monica, she will use this to her advantage.

While Lewinsky is prominent in Minaj's mixtape work, she does not appear in Minaj's later, more mainstream music.[7] Minaj stated that once she realized children knew her lyrics, she felt guilty because it was not how she acted around her siblings of the same age.[3] For this reason, Minaj officially stopped using the Lewinsky character, along with a need to grow as an artist, though she has also questioned if she abandoned her in a pursuit of fame.[8][9]

On the topic of her first album, Minaj made clear that the abandonment of Lewinsky was also reactionary to what was expected of her by the hip hop world:

By abandoning the Lewinsky person, Minaj aimed to reject the public's preconceived notion that she had nothing to rap about other than sex.

In an interview on The Ellen DeGeneres Show in 2012, DeGeneres asked Minaj how she felt about young fans knowing her explicit lyrics. Minaj responded with the following:

"You know what, I don’t really think I have to deal with it. I’m not their parents…I can only give advice and you guys know I always give my young little lady bugs my most precious advice. Which is to stay a child, don’t rush to grow up. You know the good thing about my album is we always make it in a clean version."[11]

Minaj's new attitude about who is to blame for children knowing her explicit lyrics shifted the blame from herself to parents, implying that she would not feel guilty about taking on the role of Lewinsky once again.

With the re-release of her second studio album, The Re-Up, Minaj's fans noticed the return of sexually charged lyrics in the style of Lewinsky, then re-dubbed Mixtapenika.[2] Releasing more music of this nature in 2013, Nicki hinted that Lewinsky may be making a comeback.[12]

Beam Me Up Scotty 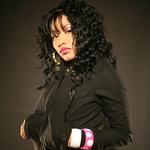