Norman, or Blanket Man, is an alter ego of Nicki Minaj.[1]. He made appearances on UStream along with SB. SB also has a alter ego named Rodney which is similar to Nicki Minaj's alter ego. They used to UStream for fans to let them know what was going on with Nicki Minaj and the other alter egos. Both Norman and Rodney wear a scarf around their heads with sunglasses on.[2] Norman is very mysterious and almost anything is know about him.

On May 7, 2011, Norman announced Tyrone, a new alter ego that is featured, as Norman said, in Till the World Ends (The Femme Fatale Remix). Norman also said that Tyrone is a crackhead from Harlem, New York.[2] 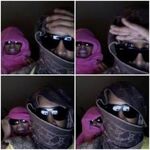 Add a photo to this gallery

Retrieved from "https://nickiminaj.fandom.com/wiki/Norman?oldid=80681"
Community content is available under CC-BY-SA unless otherwise noted.