Out of My Mind

In the song, both B.o.B and Nicki Minaj (as alter ego, Roman Zolanski) are supposedly out of their minds in the song. They are arguing and going at each other throughout the song, similar to what Barbie and Roman did in Kanye West's song, Monster. Nicki verse starts off by saying, "What's your name? B.o.B? So they callin' you Bob?/ Stop playin' nigga, you know that I'm known for the bob/ Couple of hot songs got you thinkin' you a heart throb/ Well this thing so good make a niggaa wanna sob." She also references B.o.B's 2010 single 'Airplanes', singing the hook then adding "Well you gon' really need a wish right now/When my goons come out and start shooting stars"

At the end of the song, they both make up. Before the end of the song, Nicki says,"Um, yeah, yeah. Nicki, B.o.B, ho. (Shhhhhhhhhhh...they might be listening)". In an interview, B.o.B said that it will all make sense in the music video. He didn't want to give to much away. Nicki confirms that there will be a music video when a fan ask about the video. She replied "Hellz yeah..."[1]

On August 22, Nicki said that the video will premier on August 23 on BET's 106&Park.[6] The video premiered on August 23. B.o.B. tweeted the link to the video on YouTube.[7] The video was directed by Benny Boom[8], who has worked with Minaj previously in the videos of Right by My Side and Pound the Alarm. 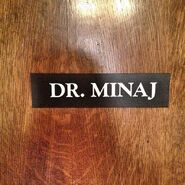