The release of Minaj's debut album was highly anticipated following numerous appearances on singles of other mainstream artists. The album was heavily promoted with a total of eight official singles including the international hits "Moment 4 Life", "Super Bass" and "Fly" as well as the Billboard Hot 100 hits "Your Love" and "Right Thru Me". The album was also supported by the Pink Friday promotional concert tour in October of 2010.

Pink Friday debuted at the second spot on the US Billboard 200 chart with 375,000 copies sold in its first week. It eventually reached number one, and spent a total of thirty-nine weeks on the chart. The album has sold five million copies in the United States as of November 2020.

On her Twitter Minaj stated that if she reached one-million followers she would dedicate a Ustream to her fans. On August 3, Minaj went on Ustream to call fans who emailed her their phone numbers and to reveal the album's title.[1] On August 3, 2010 Minaj revealed on a Ustream.tv channel for her fans that the albums name would be Pink Friday stating, “To carry on a great tradition of Black Friday, we are going to switch it up this year in honor of the Nicki Minaj album and call that day Pink Friday, and call my album Pink Friday!”[1] A deluxe edition of the album has also been confirmed.[2] Minaj released the artwork for her album cover on Friday, October 15, 2010.[3] Rap-Up commented on the album cover stating "The cover features Minaj as a doll alarmingly staring at the camera, sitting armless on the ground with her elongated legs in a flowing silver corset, pink stilettos, and a stark pink wig."[4]

On June 17, 2010, promotional photos for the album were leaked online, depicting Minaj in a neon-orange wig dressed as a ninja.[5] On July 8, 2010, Minaj announced via Twitter that the album will be released on November 23, 2010.[6] It was later announced that the album got pushed up by one day to November 22, 2010.[7] Minaj's official website and related social networking pages later announced that the digital download version of the album would be availabe for pre-order through iTunes on October 30, less than a month before the release date of the physical edition.[8] Music videos for four additional tracks are planned: "Moment 4 Life" featuring Drake, "Save Me", "Fly" featuring Rihanna, and "Girls Fall Like Dominoes".[9] On January 5, 2011, Minaj booked Sanaa Hamri to direct the music video for "Fly" featuring Rihanna.[10] In March 2011, Minaj booked Sanaa Hamri to direct the video for "Super Bass".[11]At the beginning of May, a teaser trailer was released for "Super Bass". Around Memorial Day weekend, it is expected that the previously recorded video for the track, "Fly", will be released.[12]

"Massive Attack" was released on April 13, 2010 through digital distribution. It charted at number 75 on the Hot R&B/Hip-Hop Songs chart. The song was a distinct change in Minaj's previous work on mixtapes and features, thus receiving mixed to positive reviews from critics, commending lyrical content and distinctiveness, and critiquing that it did not fit her "Barbie" persona well. The song bubbled under the Billboard Hot 100 at 22, and peaked at 65 on the Hot R&B/Hip-Hop Songs chart. "Massive Attack" was initially announced as the album's lead single, however, after the single's poor chart performance, Minaj dethroned its lead single status and declared that it would not be featured on Pink Friday.[13] "Your Love" was released as the album's first official US single on June 1, 2010 and as the first single in the United Kingdom on July 2, 2010. Initially, the song had never been planned for release, but due to abounding airplay it was mastered and used as the follow-up to "Massive Attack". The song has so far peaked at number 14 on the Billboard Hot 100, and at 5 on Hot R&B/Hip-Hop Songs and topped the Rap Songs chart for eight consecutive weeks. Minaj became the first female artist to top the Rap Songs chart unaccompanied since 2002. It also charted in Canada and the UK.[14] "Right Thru Me" was released on September 24, 2010[15] and officially impacted urban radio on October 5, 2010.[16] A music video directed by Diane Martel, was released for the single on October 27, 2010.[17] "Moment 4 Life" which features Drake officially impacted Rhythmic radio on December 7, 2010[18] and was released on March 20, 2011.[19]

Minaj announced via the social networking site Twitter that she would kick off a five-date Pink Friday Tour a month before the album drops.[33] Tweeting, "Ok Barbz, here are the 1st 5 dates on my Pink Friday Tour," the tour began in Philadelphia on October 22, and ran through October 30 in Trinidad and Tobago.[33][34]

In the UK, in its fourteenth week, Pink Friday climbed back into the top 40 at number 34, the same position it peaked at during the week of its album release.[43] The following week, the album climbed to a new peak of number 32.[44] It has been certified Gold by the BPI as of April 1, 2011. On May 21, 2012, it was announced that Pink Friday went Gold in Australia.[45] The album was also certified Gold in the Philippines in July 2012. Since then, Pink Friday has went Platinum in both the UK and Australia.

The official track listing as reported by MTV was revealed through the iTunes Store on October 30, 2010.

The gallery below is a digital copy of the "Pink Friday" booklet. 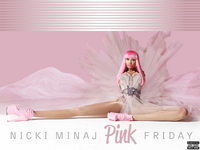 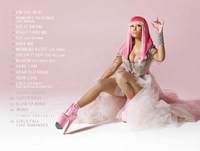 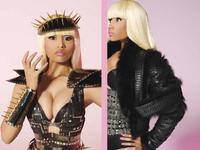 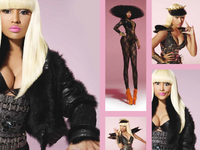 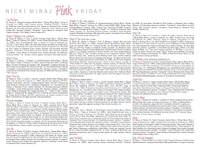 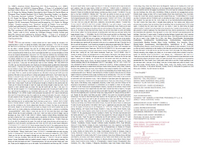 Information and Thank you