Pink Friday: Roman Reloaded (or Pink Friday ... Roman Reloaded ) is the sophomore studio album by Nicki Minaj. The album was released on April 2, 2012. On March 1, 2012, Minaj revealed the artwork for the album. The cover shows Minaj in a blonde wig in front of a colorful background, with her face covered in pink, yellow, and green paint.

The first promotional single from the album, "Stupid Hoe", was released on December 20, 2011. "Starships", which replaced "Va Va Voom" as the lead single, was released on February 14, 2012. "Roman Reloaded" was soon released afterwards as the second promotional single. "Young Forever" and "Marilyn Monroe" both leaked online in February 2012. On March 20, Minaj released "Beez in the Trap" (featuring 2 Chainz) and "Right by My Side" (featuring Chris Brown). The standard edition of the album leaked March 28, 2012, the bonus tracks, except for "Press Conference" leaked the next day.

The album debuted at #1 on the UK Albums Chart and the UK R&B Albums Chart. Pink Friday: Roman Reloaded is the first album by a female rap artist to chart at number one in the United Kingdom, with first week sales of 47,462 copies, which is why the album became Gold in the UK.

"Right By My Side"

"Beez In The Trap"

On May 24, 2012, Nicki created a poll asking her fans to pick her next single. There were 3 different polls to pick one song from each. The first poll was between the four pop ballad songs: "Marilyn Monroe", "Fire Burns", "Young Forever", and "Gun Shot". The second poll was between the three rap/hip-hop songs "Champion", "HOV Lane", and "I Am Your Leader". The third and last poll was between the three dance/techno songs "Va Va Voom", "Whip It", and "Pound the Alarm". "Pound the Alarm" was chosen as the next single over "Va Va Voom" due to popularity in many countries, and having been requested and played on many radio stations[1][2]. Minaj later confirmed that "Champion" will be the next urban single.[3] This changed due to the release of The Re-Up. The next urban single was "The Boys", which was the lead single off The Re-Up.

*"Press Conference" is not an actual song, but rather a press conference with Nicki Minaj, Charlemagne, and Safaree "SB" Samuels discussing the album.

The gallery below is a digital copy of the deluxe version of the Pink Friday: Roman Reloaded booklet. 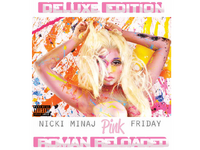 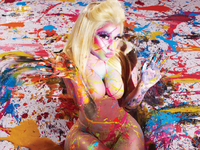 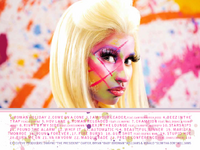 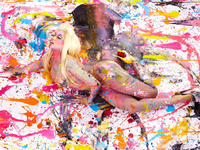 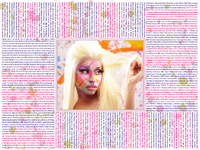 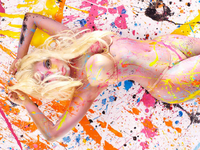