Nicki Minaj Wiki
Register
Don't have an account?
Sign In
Advertisement
in: Pages with reference errors, Fragrance, Products,
and 2 more

Pink Friday is the name of Nicki Minaj's award-winning debut fragrance released on September 17, 2012. She is involved with every aspect of the process including product development, packaging, and advertising. The bottle was designed by Lance McGregor of Paul Meyers and Friends. The notes of the fragrance are Starfruit, Italian Mandarin, Boysenberry, Fresh Gardenia, Lotus Flower, Jasmine Petals, Creamy Vanilla, Carmelized Pear, Skin Musk, and Sheer Woods.[1]

On April 17, Nicki Minaj announced that she will be having a new fragrance coming out.[2] She had signed an exclusive fragrance licensing agreement with beauty company Give Back Brands LLC.[2] Nicki said that she will be involved in all phases of her debut fragrance including product development, packaging, and advertising.[3]

"I am so excited about my fragrance debut, and am proud to partner with Give Back Brands for such a personal project,[4] I have always been a huge fan of great fragrances; this is yet another extension of my creative expression and I can't wait to share it with the world. I designed this scent and bottle with my Barbz in mind; I know they will love it!"
—Nicki Minaj, The Sacramento Bee

On August 20, Nicki said on her Twitter that "tomorrow" (August 21) she will reveal the name of her fragrance and a picture of the bottle.[12] She later, on August 21, as she promised, tweeted the name and the bottle fragrance[13] and later revealed, with an image, that it is related with Barbie[14], one of her most famous alter egos. She also reveal, the same day, a few thing about her fragrance, like that the release date of it will be on the end of September[15] and that she will release sets of bath soaps and creams after the release of the fragrance.[16] She will have lotion and hair mist as well.[17]

The fragrance was announced to be released in the US at Macy's, Dillard’s, Belk, Nordstrom, Lord & Taylor, and other fine department stores at the end of September.[18], in Canada in October,[19] and that it will be released Internationally by Elizabeth Arden either at the end of the year or the beginning of 2013.[20]

On April 17, 2012, it was announced that Nicki would pair up with Give Back Brands LLC for the fragrance. On June 12, 2012, beauty products maker Elizabeth Arden Inc. reported that it had acquired licenses and certain related assets fragrance brands from Give Back Brands LLC. Elizabeth Arden expects the transaction to be accretive to earnings beginning in the first half of fiscal 2013.[21]

Excluding the impact of the transaction, the company affirmed its fiscal 2012 guidance for earnings per share of $1.95 to $2.00, net sales growth of 5 percent to 5.5 percent, and gross margin increase of 200 to 250 basis points over fiscal 2011.[21] The company noted that the outlook excludes any expenses related to its acquisition of the Ed Hardy, True Religion and BCBGMAXAZRIA fragrance licenses announced by the company on May 31.[21] The perfume will be released by them Internationally.

The bottle for Pink Friday is in the shape of a bust with a gold head. The lips on the 100ml and 50ml bottle are pink, while they are left gold on the 30ml, 15ml and 7.5ml bottle.

The fragrance was released on September 17, 2012, along with others products. It is available at Macy's, Nordstrom, Dillards, Lord and Taylor, Belk, Stage, Bonton, and Boscov's.[22]

‘Pink Friday’ is a celebration of my life at this moment; it is a reflection of me as a creator, and an expression of me as a woman. I know my Barbz will connect with and appreciate each aspect—from the name, to the outrageous bottle design, to the vibrant colors that create their own song. ‘Pink Friday’ shows off my personality and style; it’s exciting to express my voice through another dimension.
—Nicki Minaj, Rap-Up.com: Nicki Minaj Debuts ‘Pink Friday’ Fragrance Ad

The fragrance is a mixture of juicy fruits, creamy vanilla, and sensual musks.[23] It will be available at Macy’s, Dillard’s, Nordstrom, and other department stores starting on September 17.[23] Minaj released two advertisement for promote her fragrance. In the "front ad" she wears a pink wig, tutu, leggings, and sparkly heels while posing in front of the New York skyline in the photo.[23]

As part of the promotion of her fragrance, Minaj opened a website exclusively for her fragrance called "nickiminajbeauty.com", on September 27.[26] The website included information about the fragrance, the campaign, downloadable wallpapers, sign up options, and links for buying the fragrance.[22] That website is now defunct, and has been moved to http://www.nickiminajminajesty.com/#pinkfriday. After the one year release, the perfume went for a "wide release" which meant it was available in all stores(Walmart, CVS, Rite Aid, Burlington, Kohl's, Target, etc.).

Minaj announced a fragrance signing on September 19 through her twitter. It took place at Macy's in Herald Square, New York City on Monday, September 24.[27] In order to attend, you had to have a VIP fragrance package which included all the Pink Friday merchandise. To receive the package, you had to be one of the first 300 people in line at the Macy's Herald Square on Saturday, September 22, 2012.[28] Whoever got into the signing, received an autographed 'Pink Friday' keepsake poster 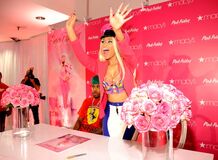 Minaj announced a fragrance signing in November 2012. It took place at Myer in Sydney, Australia on November 29, 2012.[30] The first 180 fans who bought the fragrance online got VIP passes to the event. 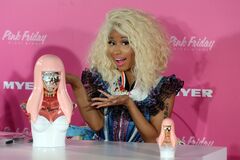 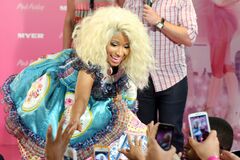 Pink Friday has won four awards out of eight nominations.

There were two advertisements released for the fragrance. The first was a promotional internet release featuring "Whip It". The second was the official advert and features "Freedom". It features Minaj laying in a bed of black roses, she picks one and her finger is cut by a thorn. A drop of pink falls from her finger and colors the entire field a beautiful shade of pink, as her body becomes embellished in gold, and her eyes a bright pink. 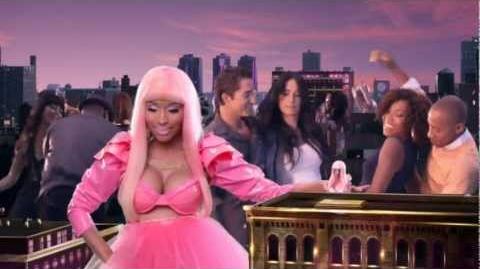 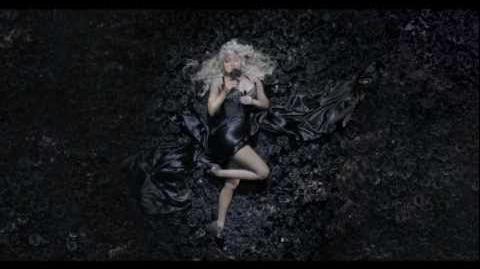 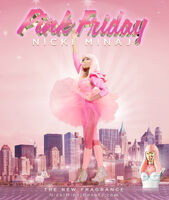 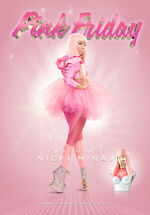 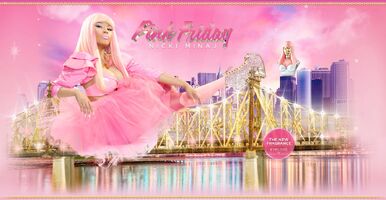 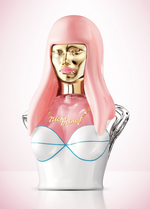 On September 5, a fan asked how much all of the products would cost. She tweeted back the prices of all the products in Twitter.[17] After a certain amount of time these prices get discounted. Prices from initial release below: 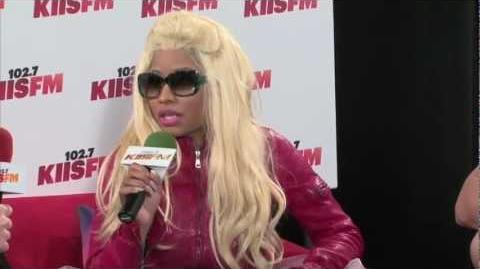 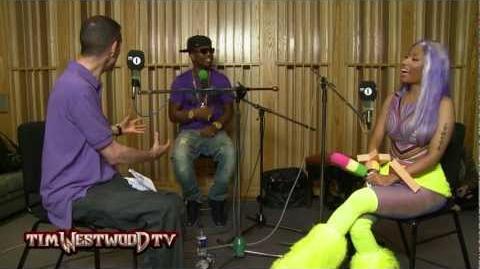 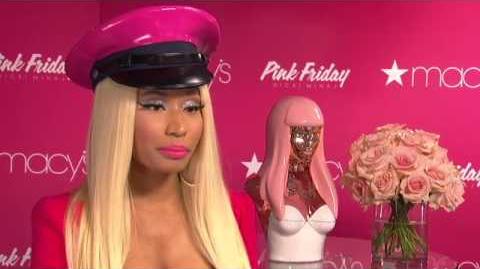 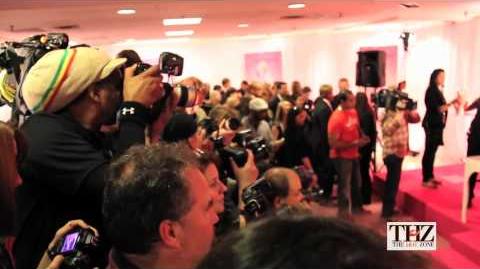 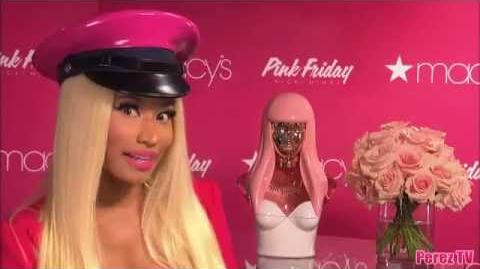 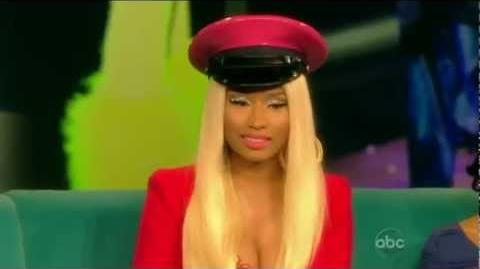 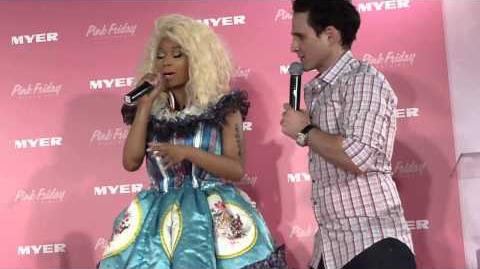