Not to be confused with Pink Friday Tour (promo).

The 2012 Pink Friday Tour was a world tour that was announced by Nicki Minaj in March 2012. The tour supported her second studio album, Pink Friday: Roman Reloaded, and was the first non-mini tour to support her debut album, Pink Friday. The tour grossed $3.5M for 22 concerts in the United States for 2012.

Festivals and other miscellaneous performances

The stage for the Pink Friday Tour

Minaj performing on the tour.

Minaj communicates with her fans on the tour.

Roman is the shit on stage!

Nicki speaks with her fans

Nicki the Ballerina on tour. 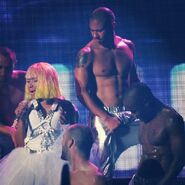 Nicki gets hot with the boys. 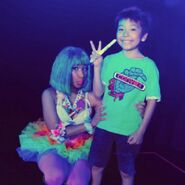 Nicki can be international.

A special fan joins her on stage!

On tour, Nicki can get colorful! 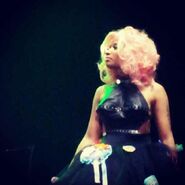 Exclusive Outfit/Wig for Amsterdam Only!!!

Take your medication Roman because Barbie is in the building!!! London!!!

Queen Barbie and her pink wig is back!!!!! 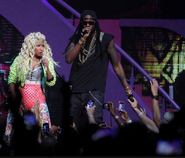 Nicki and 2 Chainz performing "Beez In the Trap"

The black wig returns in Detroit!
Add a photo to this gallery

Retrieved from "https://nickiminaj.fandom.com/wiki/Pink_Friday_Tour_(2012)?oldid=84914"
Community content is available under CC-BY-SA unless otherwise noted.