"Pound the Alarm" is a song by Nicki Minaj from her second studio album, Pink Friday: Roman Reloaded. The song is the second international single off the album, and fourth single overall. It was written by Minaj, Nadir Khayat, Carl Falk, Rami Yacoub, Bilal Hajji, and Achraf Jannusi, and was produced by RedOne, Carl Falk, and Rami Yacoub. It was released on UK radios on July 2, 2012. It was officially added to US Mainstream Radio on July 17, 2012, and Rhythmic Radio on July 31, 2012. A music video was filmed for the song on July 4, 2012, and premiered on July 31, 2012 on VEVO.

It is one of the fastest rising single in UK chart history, released by an artist of any genre risen 118 spots in 14 days.[1] The song has made Nicki Minaj the highest chart female rapper along with "Starships" with two Top 10 songs from the same album. It peaked at #1 on the Hot Dance/Club Play Songs chart making it Nicki's first #1 song on that chart as a solo act. Her official 1st song to top the chart was "Turn Me On" shared with David Guetta. It was the most added song to the radio during the week of the single release. It is the second most successful single from Pink Friday: Roman Reloaded, reaching the top 40 in 17 countries, the top 10 in 9 countries, and reaching the #1 spot on the US Hot Dance Club Songs Chart.

The song has been certified 2x Platinum in Australia, Platinum in Norway and the US, and Gold in New Zealand and the UK. It is also certified Gold in Denmark based on streaming.

A poll was posted on Minaj's official website, on May 24, 2012, asking the fans to choose the next singles. The poll is divided into three categories. The third category asks the fans to choose between "Pound the Alarm", "Whip It", and "Va Va Voom". "Va Va Voom" had the most votes and won the poll, second was "Whip It", and third was "Pound the Alarm".[2]

The cover artwork for "Pound the Alarm" is a shot taken from the Starships photo shoot that features the face of Nicki, with the words "Nicki Minaj" in green and pink color fonts on the left side of the cover, and the word "Pound the Alarm" underneath in grey font color. It is from the promotional remixes CD of the song released exclusively for United States.[9][10] 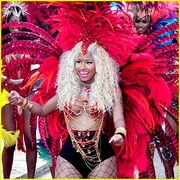 The stills are taken from dailymail.com.uk

"Pound the Alarm" was performed live for the first time at BBC Radio 1's Hackney Weekend on June 23, 2012. The song was also performed on The Tonight Show with Jay Leno on July 13, 2012.[20] She also performed the song on The Today Show's summer concert series. It was in the setlist of Minaj's Pink Friday Tour.

The credits for "Pound the Alarm" are adapted from the liner notes of Pink Friday: Roman Reloaded.[21]