Regret In Your Tears

"Regret In Your Tears" is a song by Nicki Minaj. It was released as a single on March 10, 2017 along with "Changed It" and "No Frauds". The track was written by Minaj, Brittany Hazzard, Adam Feeney, Allan Ritter and Matthew Samuels (Boi-1da) and produced by the latter two along with Frank Dukes. It was later released to contemporary hit radio on March 14.[1]

The music video for "Regret In Your Tears" was directed by Mert & Marcus and premiered on April 30, 2017 on Tidal. The video was later uploaded to Minaj's VEVO account on May 5, 2017.

A lyric video for the track was uploaded to YouTube and VEVO on March 24, 2017. 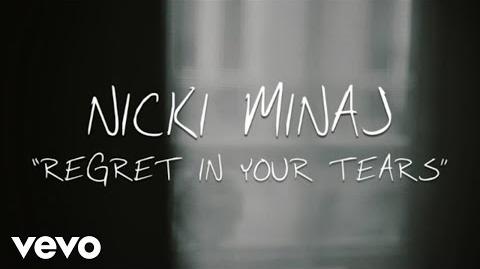