"Roger That" is a song by rap group Young Money Entertainment released as the third single from their debut collaboration album We Are Young Money. Lil Wayne, Nicki Minaj, and Tyga rap on this song. The video was released on March 1, 2010, alongside "Girl I Got You".[1]

The song received generally positive reviews by critics, most of which favored Minaj's contribution to the song. "Roger That" debuted and peaked at fifty-six on Billboard Hot 100, fifteen on the Hot R&B/Hip-Hop Songs and six on the Billboard Rap Songs.

In the 2010 Sucker Free Summit, Lil Wayne's verse in the song was nominated for the Verse of the Year award along with label-mate Nicki Minaj for her verse in "My Chick Bad".

[Verse 1: Nicki Minaj]
I'm in the collard green 6, cornbread in the guts
Got the Halloween kicks, trick-or-treating the clutch
C'mon nigga, is you tricking or what?
Flow, flow tighter than a dick in the butt
Just hopped off the plane, came back from Vancouv'
Little white T, some boobs, and bamboo
White girls tell me "Hey Nicki, your camp rules
Is that why you get more head than shampoos?"
As-Salamlu alaykum, no oink for me
And I never let a d-boy boink for free
'Cause it's Barbie bitch, you can join the wave
I've done penny nickel dimed, I done coined the phrase, ha!
You couldn't beat me there if you had a Lear
Indian-style, courtside with a cavalier
VIP, rosé; you can have a beer
Cause honey when you getting money you don't have a care
Now r-roger that, r-r-roger that
R-roger that, r-r-r-roger that
R-roger that, r-r-roger that
R-R-R-R-R, ROGER

The single garnered generally positive reviews most of which complimented Nicki Minaj's assistance on the single. XXL magazine gave Minaj a positive review on the song stating, "On “Roger That,” for instance, YM’s female MC Nicki Minaj steals the spotlight".[3] HipHopDX also favored Minaj's verse but stated the track would be better without Wayne stating, "Nicki Minaj owns most of the tracks she’s present on including 'Roger That' and 'Fuck da Bullshit', two more songs that could’ve done without Wayne."[4] Planet Ill gave the song a negative review stating " 'Roger That' is the final breath for an album that’s lifeless by its end."[5] Nathan S. of DJ Booth gave the song a mixed review commenting on Minaj as part of the whole album but predictable in "Roger That" stating, "Nicki Minaj can’t be ignored, although over the course of an album her wild style can become oddly predictable (especially on 'Roger That', where she sounds almost bored)."[6]

The music video, directed by David Rousseau and Adam Rush, was released March 1, 2010, the day before Lil Wayne was supposed to be sentenced to jail after the second postponing and same day as the premiere of Lil Twist & Lil Chuckee's "Girl I Got You." The video was shot entireley with a green-screen and pays homage to Sin City and bases a more adult story of Who Framed Roger Rabbit.[7][8] The video stars Lil Wayne, Tyga & Nicki Minaj and also featured other Young Money artists.[9] 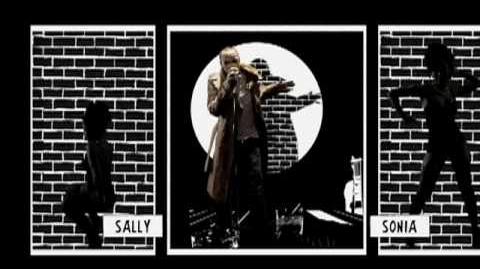