Rosa (pronounced "Rrrrrosaaa") is an alter ego of Nicki Minaj, created during an interview on Lopez Tonight back at the end of 2010[1]. Because of the Mexican origins of the host, George Lopez, Minaj decided to create a Spanish alter ego. She was later mentioned on December, 13, at a Chelsea Lately interview.[2]

In June 2012 after her Hackney Weekend Festival, Nicki had an interview with SB.TV's interviewer Aaron. In the interview, Aaron ask Nicki if she could answer some questions with some of her alter egos. One of the alter egos that Aaron selected was Rosa. He asked to her "who is the best rapper, in your opinion?" and she answered, slightly accented: "Oh, ay Dios Mío, ¡yo no sé!" (which means: "Oh My God, I don't know!"), she continued in Spanglish saying: "The best rapper?, Oh My God, let me think papi ¡yo no sé!... ¡Pitbull!."[3] It can be noticed the distressed personality of Rosa and that she can speak some Spanish.

Rosa appears in these interviews and song: 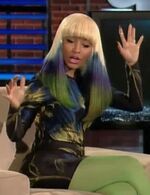 This is the first appearance of Rosa.

Rosa was briefly mentioned at the Chelsea Lately interview 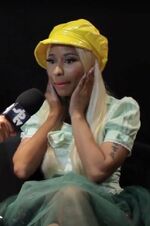 The second real appearance of Rosa, at SB.TV 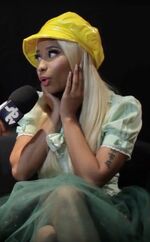 Rosa along with Queen Sleeze