Nicki Minaj Wiki
Register
Don't have an account?
Sign In
Advertisement
in: Songs, Minaj songs featuring others, Videos,
and 2 more

"The Boys" is a song by Nicki Minaj and Cassie from the re-release of Minaj's second studio album, Pink Friday Roman Reloaded: The Re-Up. The song serves as the lead single of The Re-Up. It was written by Minaj, Jean Baptiste, Jonas Jeberg and Anjulie and it was produced by Jonas Jeberg and Jean Baptiste (co-producer). The song premiered on the US radio station iHeartRadio on September 13, and as a digital download the same day. It officially impacted Rhythmic Radio on September 25, 2012. A music video was filmed on September 21, and premiered at VEVO on October 18, 2012.

On September 10, Minaj started a "Q&A time", using the hashtag "#TheReUp" (referring to the re-release album), which consisted of fans asking Nicki questions about the re-release and the single (which she confirms that it will be released "this week", meaning September 10 to September 17).[2] In the Q&A time, many fans ask about the new single. With this, Minaj confirmed the name of the song ("The Boys"),[3] a video being shot for the single, [4] in which format the single will be released (digital download from Itunes),[5] and that the song features a female artist.[6] A day later, Minaj tweeted "Thursday" which is believed to be the release date of the single.[7]

The song was released on September 13, 2012, as a digital download from Itunes.[8] It also premiere the same day on US radio station iHeartRadio.[9] It was officially released at Rhythmic radio on September 25, 2012,[10] and was the most added song on rhythmic radio the week of its release.[11]

Cassie commented that "It was great working with Nicki on the song. We actually had been trying to get together for a while; we did a record together I want to say maybe two-and-a-half years before this, and it obviously didn't get any play. It was for my album, which I've been working on for years," she laughed in an interview with MTV News the week of October 14.[12] "It was kind of long overdue; we had been talking about it for a while, so it was nice to get together and finally do something, and to also have a visual to it," she said, and also said that she's honored to be included on The Re-Up: "She's always got amazing records out, so to be a part of that is really exciting."[12]It is a promo single because it is bad on the charts.

The vocals of Cassie are from her second single "Money On Love" (from her sophomore album) which was leaked as a demo and was never officially released.[13] The demo is exactly the same as "The Boys," with the only difference being Nicki Minaj vocals and some missing parts of Cassie.[14]

The Boys is a hip hop and pop song produced by Jonas Jeberg, and co-produced by Jean Baptiste,[15] and it was written by Jean Baptiste, Jonas Jeberg, Onika Maraj, and Anjulie Persaud.[16] It features a mix of synth swoops, syncopated percussion and gurgling acoustic-guitar arpeggios by Jeberg and Baptiste.[15] It also has a throbbing beat, harsh basslines and hyperactive breaks.[17] Cassie's parts are backed up by a guitar line.[18] The song is about a pithy kiss-off to men who try to buy love with money and jewels.[17]

The song received mostly positive reviews from music critics. Gerrick D. Kennedy from LA Times commented that Minaj has "married the two styles" of rap and pop. Kennedy also said that the song "begs for immediate radio play" and called it a "fresh reminder of the Minaj tracks her rap fans love."[17] Nate Jones from Popdust gave the song four out of five stars to the song and said that the song is "catchy as hell, but with enough 'credibility'."[18] Rick Florino from ARTISTdirect gave the song a very positive review, giving it five out of five stars and called it "one of Minaj's best tracks yet and a landmark song for 2012."[19] He thanked Minaj for "changing the game again" and ensured that "the barbz are gonna freak on this one."[19]

Robbie Daw from Idolator said that the song "probably won't shake out as being the most memorable entry into Nicki's canon of jams."[20]

"The Boys" was performed live in the Pink Friday: Reloaded Tour.

Minaj confirmed that a video was planned for the song during the "Q&A time" of The Re-Up. [4] The film of the video took place on September 21, 2012,[21] at Los Angeles, CA,[22] by Colin Tilley who also shot the I Am Your Leader music video.

On October 3, Nicki released a Behind the Scenes footage of her upcoming video. [23] A still image from the video was released October 10 on Nicki's twitter account, which was deleted later. It shows her in a pink and blue wig. On October 18, it was revealed that the video will be released the same day at 12:00 PM EST.[24] Minaj confirmed this about an hour later.[25] The video premiered on VEVO on October 18, 2012 at 12:00 PM EST.[26]

Cassie talked about the video with MTV News: "The concept of the video was definitely a collaboration. I've known [director] Colin Tilley for a really long time, but I hadn't got to work with him yet, so this was our first time," she said. "He really wants to hear the artists' input and wants to know what we want to do to make the video great. So he came to us with the treatment of us being in a Barbie world, and I wanted to put my little flavor on it, so I was like, 'What if I was Ken?' So Nicki loved the idea, and that's where that stemmed from."[12] She also explained that her inspiration "behind the look in the blue suit and the graffiti top was 'Ken on steroids.' Or 'Ken inspired by East London punk,'"[12] 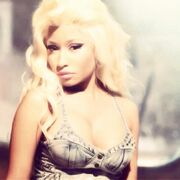 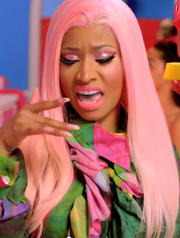 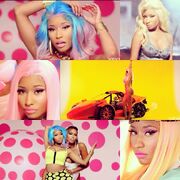 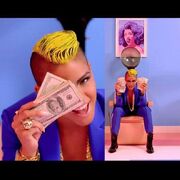 Minaj told her fans, on October 3, that she will release a behind the scenes footage from her music video, "The Boys", on that same day.[27] Some hours later, she posted a video on her Twitter with the behind the scenes footage.[23]The video shows a well-dressed Nicki with yellow hair, a "gangster" hat, orange pants and a green jacket walking at a pink, green and purple street accompanied by a group of hunk men with pink suites wearing pink umbrellas. It also features Nicki talking about the "fabulous" video stage and she riding a car with pink dices.

Nicki Minaj:
Punch line queen, no boxer though
Might pull up in a Porsche, no boxster though
Tell a hater, "Ayo, don't you got cocks to blow?"
Tell them Kangaroo Nick, I'll box a ho
They said I got five and a possible
Don't go against Nicki, impossible
I done came through with my wrist on popsicle
Man, these hoes couldn't ball with a testicle, n****

Cassie:
Your lipstick stain smells like a cheap hotel
Diamond watches and a gold chain
Can't make my frown turn around

Cassie:
You get high, fuck a bunch of girls
And then cry on top of the world
I hope you have the time of your life
I hope I don't lose it tonight

Nicki Minaj:
Bald head pussy got lots of juice
Lopsided on the curb, so I block the coupes
Watch the deuce
Man, I'm stingy wit my kitty cat daddy
"Did you ever really love me Steebie?"
Rrrrrrr, pull up in the rrrrrrr
Wrist on burrrrr, pussy on purrrr-purrrr
I don't even brake when I'm backing up
I'll swerve on a n**** if he acting up
I done pushed more sixes than a play date
Get money by the millions, fuck a day rate, n****

Cassie:
Your bossed up swag got 'em drooling like a newborn babe
The dollars in they eyes got them blinded by a Masquerade

Cassie:
You get high, fuck a bunch of girls
And then cry on top of the world
I hope you have the time of your life
I hope I don't lose it tonight

Verse 5: Nicki Minaj:
I put all you bitches on to them good lace fronts (ouh)
Girls is my sons, carried them for 8 months (ouh)
And yes, you're premature, Young Money to the Core (ouh)
I might give you a ticket so you can come see the tour (oouch)
Oh, that's your new girl, that's that mid-grade
Buck 50 on yo face with the switch blade
Or the razor, yeah, the razor
She my son yeah, but I ain't raise her
Goose me, hater! I get that loose leaf paper
Them V-necks be studded out, T-Rex be gutted out
I told 'em Nicki be chilling, I'mma keep hurting they feelings
Because you'll never be Jordan you couldn't even be Pippen
You couldn't even be tripping, you can't afford a vacation
I'm out in Haiti with Haitians, I go to Asia with Asians
You mad dusty, you a lil dusty possum
I just come through with the six like my name was Blossom

The credits for "The Boys" are adapted from the liner notes of Pink Friday: Roman Reloaded - The Re-Up.[29]