Nicki Minaj Wiki
Register
Don't have an account?
Sign In
Advertisement
in: Miscellaneous, The Ellen DeGeneres Show, TV,
and 9 more

Nicki Minaj has appeared a total of seven times since her first appearance on January 10, 2011. She is always interview, and commonly performs her current singles including "Moment 4 Life", "Super Bass", "Right by My Side", "Starships", "Freedom", and "Bed of Lies".

Nicki talked to Ellen about the release of Queen on the Season 16 premiere.

Nicki helps Ellen and Walmart give money to students to pay off their loans.

Nicki went on Ellen to promoted her third studio album, The Pinkprint.

Nicki talked to Ellen for the fifth time in Season 12, Episode 3.

Nicki talked about the video and reacted to the video live on the show, laughing.

Nicki and Ellen talked about Nicki's VMA wardrobe malfunction. She told Ellen how it all went down. Ellen gave her a present.

Nicki Minaj was back on the couch on The Ellen DeGeneres Show on January 15, 2013. The red-hot rapper spoke about her "strenuous" experience taping "American Idol, her feud with Mariah Carey, and her dating life.

"It was just two big ol' divas, I guess," said Nicki, who explained how it all started. "I heard them saying Mariah doesn't want you on the panel, but I was saying, 'No, I'm friends with Mariah.' And I was like arguing with people, like, 'Don't believe everything you read. You're crazy!'"

While she didn't want to believe it, she eventually noticed the awkwardness. "I went there and I started feeling a little bit of the shade. I overcompensated by being crazier."

According to Nicki, the dueling divas have buried the hatchet. "We're fine. I cannot hold a grudge against Mariah Carey. What people don't understand is that I've looked up to her for so many years. ... I don't know if she's gotten over it, but I have."

However, she is not looking forward to the live shows because of the potential conflict. "I don't want anyone on the panel to say something crazy 'cause I don't want to look like a crazy psycho again," said Nicki, who insisted she is not crazy.

While she claimed the ring on her finger is not a wedding ring, she remained coy about her love life. "I don't have anyone," she smirked, adding, "It has to be someone very secure because it's so easy to feel insecure."

With a pink mic in hand, Nicki hit the stage to perform her The Re-Up single "Freedom" underneath chandeliers.

Nicki Minaj returned to The Ellen DeGeneres Show where she reunited with Sophia Grace and Rosie, the adorable British girls who covered her song "Super Bass" on YouTube. After Ellen teased her about her revealing outfit, a blonde Nicki spoke about being a role model, buying her friends Range Rovers, and disabling her Twitter account.

Since becoming a superstar, she has a hard time going unnoticed, especially when she drives through Malibu in her pink car. "People are willing to have an accident," said Nicki. "A girl literally cut through traffic and made a U-turn just to put her car in front of my car, so she could take a picture."

She also shared some advice for her young fans. "Pink is your color. Pink is gonna keep you happy for the rest of your life," she told Sophia and Rosie. "Pink is gonna give you power, energy, and the girliness that you need. You wear your crown and you're a queen."

Eight-year-old Sophia Grace and her 5-year-old cousin Rosie became overnight sensations when their YouTube cover of Nicki Minaj’s "Super Bass" went viral. The young girls appeared on The Ellen DeGeneres Show to perform their popular cover before getting a surprise from the Harajuku Barbie herself. Sophia lept into her arms and screamed with excitement upon seeing her idol.

"Within five seconds of seeing this video, I was calling everyone I knew and I was also receiving a billion emails. Everyone is like, 'You have to see this little girl.' She blew me away!" said Nicki as Sophia's father wiped away tears.

She foresees a bright future ahead for Sophia and also shared some advice. "We feel like we're watching a journey that's about to be amazing," added Nicki. "Music is beautiful, but I want you to stay in school. Put your books first and singing second." 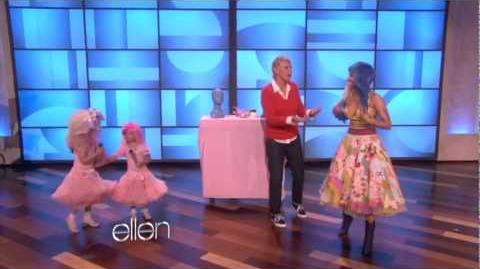 Nicki Minaj shared a "Moment" with Ellen DeGeneres, performing her Drake-assisted single "Moment 4 Life" off her debut Pink Friday on Monday January 10th show. Minaj, who classed it up in a black cocktail dress, blonde hair, and a blinged-out “Barbie” necklace, spit her verses alongside two look-alike dancers and a backing band.

After her performance, Nicki showed off her spiky stiletto heels—a gift from Lil Wayne—to Ellen, who claimed she felt "under-dressed" next to the stylish star. During her chat with the hostess, she spoke on how she didn't realize that she would ever come this far, her difficult upbringing, using rap as an escape, the love she has for her mom, and how Martha (the mother of her alter ego Roman) will be making her debut in the video for "Moment 4 Life."

Edit this section
Community content is available under CC-BY-SA unless otherwise noted.
Advertisement