Minaj firstly mentioned her third studio album in December 2012, when she nicknamed it "The Pinkprint"[1] but later, in April 2013 at an interview with MTV News, she regretted it because she wanted to start a "new era."[2] On May 28, 2013 in an interview with Peter Rosenberg, she said that she was going to "feed the core hip-hop fan" with her next project, and her desire to get back to her essence, returning to the place where she was before her debut album.[3]

Minaj yield more information about the album in September in various interviews where she reiterated her intention of not "rushing things up" because she wanted the album to be "perfect,"[4] and that she begun writing that month.[5] On November 3 in an interview at the Power 105.1 Powerhouse, she said she was not "putting a limit" to the album, and was unsure of how many songs she wanted to record which was something new for her. She also said that she wouldn't forget the pop fans, and that everyone will love the album for the "feel good sounds and lyrics".[6]

On January 14, 2014, Minaj revealed that her favorite song has the initials "GP". In addition to this, she said that she already had a name for the album.[7] Minaj called her album "The Pink Print" on February 14 at an interview with Angie Martinez of Hot 97 and she has been calling the album like that since then. She also mentioned that it won't have a release date until is finished; she said she will "see how it goes."[8] On April 22, at the premiere of her acting-debut film The Other Woman, Minaj carried out multiple interviews where she disclosed information respecting her third album. At an interview with MTV News, she said that she will "just do what her heart tells her to do" and that she is not mandatorily trying to do hip-hop tracks, she's just doing it.[9] With Access Hollywood, she confirmed that the album will be "very personal", which her new natural look reflect that.[10]

In an interview with MTV on February 28, 2013, Minaj told them that she would start recording the new album when she'll finish shooting her single "High School": "I'm about to shoot another single off The Re-Up. And then [I'll] start working on that follow-up album. I'll be doing it here in L.A. while I'm shooting 'Idol,'", said Minaj.[11] However on the American Idol season 12 finale, on May 16, Minaj confirmed that she will start recording her third album in July.[12] During the summer, Minaj was in New York City meeting with producers for the album, in addition to planning and observing for inspiration where she did not write any material.[4] She begun writing the album as of September.[5] In November 2013, she locked down in the studio for two more months to really focus on the project.[13] Recording last for roughly another year, with Ariana Grande putting her vocals on Get On Your Knees 2 weeks before release.

The musical style will be something she has never done before[6] with a blend of her debut album, Pink Friday, and her reissue album, The Re-Up.[14][15][11] Lyrically speaking, she wants "to get back to her essence" before her debut[3], she wants to go back to her "hip-hop roots." Additionally, Minaj mentioned that she, as soon as she started composing, has just been writing hip-hop songs.[9]

Minaj said that she has a lot "to talk about" in the tracks: she has "experienced so much in the last year-and-a-half" that she will explore other themes which she did not do in her features songs.[13] The album as a whole will be "very personal"[10] (an explanation of her "journey" since 2012)[16] and more "girly-er".[17]

On October 31, 2014, Nicki announced on Twitter that she would release the album cover on Monday morning (November 3) with the specific time to be revealed that Sunday night. However, on November 2 that Sunday night, she decided to release the cover a few hours early. She posted the deluxe cover on Instagram, and said the standard cover would come at a later date. The standard cover, the same as the deluxe but with a black background instead of white, was revealed in December on all the websites where the album was sold.

Nicki did a 2015 calendar with 12 photos (one for each month). A smaller version of the calendar was included in the Best Buy exclusive edition, and a bigger size version was available to purchase on her website. Minaj said the calendar was actually made for "the dudes locked away".

"The Night Is Still Young"

Nicki has stated numerous times that a tour would soon follow the release of the album. In a Twitter Q&A on July 2, 2014, a Barb asked if she was going to start touring in Summer 2015 and she replied, "Sooner". She later revealed she would start touring overseas before coming to the US during the Summer. The European leg started in March, 2015 with the US following in the summer.

On November 7, 2014, Republic Records confirmed on their website that The Pinkprint would include a downloadable short film with the iTunes digital copy. The 20-minute love story was to be told via the music and video clips, bringing everything into one cohesive vision. However, it was initially released on December 19 on her Youtube channel since she could not send it to iTunes in time. However it was later uploaded to her VEVO account and available to purchase on iTunes on January 18, 2015 and January 21, 2015, respectively. It was cut to 16 minutes, using the songs "All Things Go", "The Crying Game", "I Lied", and "Grand Piano".

The Pinkprint debuted #19 on the Australian Album Charts, at #22 on the UK Albums Chart, and #25 on the New Zealand Albums Chart, with a later peak of #21 on the latter chart. The album debuted at #2 on the US Billboard 200 chart with 244,000 units, and was streamed 16.8 million times in its first week. It was the 2nd highest first week sales by a female artist in 2014, as well as the 2nd highest first week sales by a rap artist. As of 2019, the album has been certified 2x Platinum.. It was also certified Gold in Brazil & Sweden with 20K units sold in both places. It has also been certified Silver in the UK with 60K units sold. 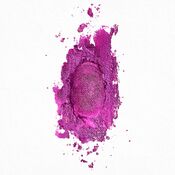 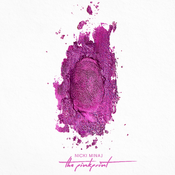 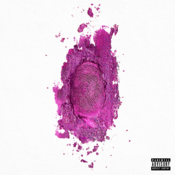 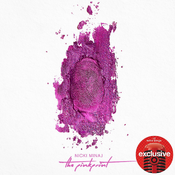