The Pinkprint Tour is the third concert tour by Trinidadian recording artist Nicki Minaj in support of her third studio album, The Pinkprint (2014). The tour was officially announced a week before the album's release, on December 8, 2014. The tour began on March 16, 2015 in Stockholm, Sweden and concluded on March 25, 2016 in Dubai, United Arab Emirates, finishing with a total of fifty-four shows over a span of twelve months. The first leg, in European, of the tour was supported by Trey Songz and Ester Dean and received mixed to positive reviews from critics, while the second leg, in North American, was supported by Meek Mill, Rae Sremmurd, Tinashe, and Dej Loaf and has been met with overwhelming commercial success. It has since been confirmed that the tour will expand into South America and Oceania, while also extending its runs in Europe and North America. In March 2016, Minaj brought the tour to South Africa for a series of four shows across the country. Later that month, Minaj brought the tour to Dubai for one show.

This set list is representative of the European leg as a whole. Additionally performed songs will be named at the bottom.

On some dates, Nicki performed some various songs that were not officially on the setlist. "Itty Bitty Piggy", "Go Hard", "Chi-Raq", "Danny Glover (Remix)", "Throw Sum Mo", "Hold Yuh (Remix)" and "No Flex Zone (Remix)" were all performed throughout the tour at different shows. 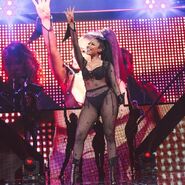 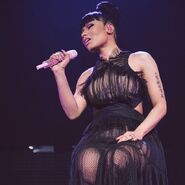