Katrina Laverne Taylor (born December 3, 1978), better known by her stage name Trina, is an American rapper, songwriter and model from Miami, Florida. Trina first gained notoriety in 1998 with her appearance on Trick Daddy's second studio album www.thug.com on the single "Nann N*gga". Since then she has released five moderately successful studio albums and has been named The Most Consistent Female Rapper of All-Time by XXL Magazine.

Trina is of Afro-Dominican descent on her father's side; her mother is Afro-Bahamian. Trina's parents were separated while she was growing up. She lived in the Liberty City projects and in Pembroke Isle, Florida. She attended Miami Northwestern High School. 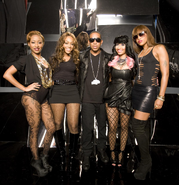