"Va Va Voom" is a song by Nicki Minaj from her second studio album, Pink Friday: Roman Reloaded. The song is the third international single, and seventh single overall. It was written by Minaj, Henry Walter, Lukasz Gottwald, and Allan Grigg, and was produced by Dr. Luke, Cirkut and Kool Kojak. It was released as a single in the UK on October 8, 2012. It officially impacted US Mainstream Radio on October 23, 2012. It was second most added song on Pop radio during the week of its radio release. A music video was filmed for the song in December 2011 and it premiered on E! News on October 26, 2012. "Va Va Voom" is also included on the official track listing of Pink Friday: Roman Reloaded - The Re-Up, Nicki Minaj's re-release album of her second studio album.

It was planned to be the lead single of her second studio album but was later replaced by the song "Starships", for unknown reasons. The song won a poll to be released as a single in the future, in May, but was replaced by "Pound the Alarm". The song has been certified Platinum in the US, Gold in Australia, and Silver in the UK.

The cover artwork for the single was supposedly released sometime between December, 2011 and January, 2012.[13] Many websites affirmed that that cover was the official one. The cover is a very simple artwork with resemblances of the previous singles covers ("Roman in Moscow" and "Stupid Hoe"). It has a purple background with the words "Nicki Minaj" and "Va.Va.Voom" written on the middle of it (with white and pink font colours, respectively). Minaj never confirmed officially the cover, neither her label, and, since "Va Va Voom" was never released as a single, the cover is unofficial. Since the announcement of "Va Va Voom" being released as a single, some relevant websites have showed the unofficial/unconfirmed cover artwork of the song but it still has not be confirmed by Minaj, neither her label.

A radio promotional CD single, released on 2012, features another cover artwork of the single.[14][15][16] The CD is not available for sale in stores. It was released as an exclusive promotional CD single for radios or at special events. The cover artwork has a purple label at the top with the words "Nicki Minaj" written on it with white font and capitalized, and a pink background with the words "Va Va" and "Voom" in different lines with purple font. Although the promo CD was officially distributed under Universal Republic label, the cover artwork is not taken as the official cover of the single, due to the means in which was released.

"Va Va Voom" receive critical acclaim from music critics and fans.[17] Kara Klenk from MTV wrote that it is the favorite track among fans.[17] David Asante from That Grape Juice gave it a very positive review stating that it is the "best evidence" of Minaj not being a temporally pop artist.[18] He said that "she fashions and molds it to her taste."[18] The Lava Lizard called it "surprisingly delightful" and said that it "should have been the lead single" of the album.[19] Mohammad Qazalbash from Asian Woman Magazine recommended the song and comment that "the track clearly deserves a live band and a slightly less over-dressed performance from Minaj."[20] He also dismiss the song a little by calling it a "typical bubblegum pop/rap track" and a "very ‘Katy Perry’" song, but said that is his favourite track of all the album.[20]

In December 2011, rumors spread about Minaj being shooting a new video for "Va Va Voom." This was later confirmed by multiple actors that tweet about the casting for the new video.[21][22] The video begin its shooting on December 21, 2011. It was filmed in Los Angeles.[23] 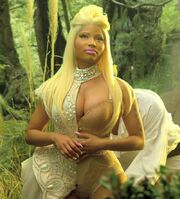 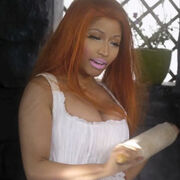 The credits for "Va Va Voom" are adapted from the liner notes of Pink Friday: Roman Reloaded.[26]