"Woman Like Me" is a song by Little Mix featuring Nicki Minaj from the groups fifth studio album LM5. It was released as the lead single from the album on October 12, 2018. Although the song did not match the success of their previous hits including "Black Magic" and "Shout Out to my Ex", the song peaked at number two on the UK Singles Chart, where it has since been certified silver.

Minaj joined Little Mix on stage at the 2018 MTV Europe Music Awards in Bilbao, Spain for their first performance of the song together.

The following is copy of Nicki Minaj's verse.[1]

Yo, woman like me, yes a woman like me (oh)
Soon as I brush up on him I could tell he like me (oh)
You know all them mandem, a try to swipe me (kyuh)
Knotted up, he could afford to ice me (Hh, rhrr)
Tell 'em there's a bad Trini bitch inna your area (uh)
But the more bad bitches, then the more merrier (c'mon)
Baddies to my left and to the rigth a little scarier (uh)
Rude boy, tell me, can you handle all this derrière? (da derrière, rhrr)
Uh, a million I'm getting my billy on
Greatest of all time, 'cause I'm a chameleon
I switch it up for every era, I'm really bomb
These bitches really wanna be Nicki, I'm really mom (uh)
Apple cut the cheque, I want all this money
Seven Up, go grip the TEC, and leave all this bloody
I-It's the Queen and Little Mix, skated on 'em, sorry
My daddy is Indian (Swish), a-all this curry (Mhm)

The music video for "Woman Like Me" was released on October 25, 2018. The video won British Artist Video of the Year at the 2019 BRIT Awards. 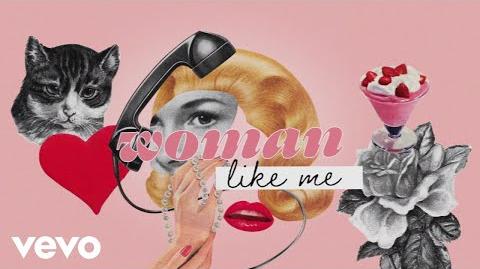